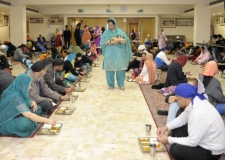 UK: A centre based on the Sikh ethos” is how one man has described the plans for a new building bought by a gurdwara.

The centre will house activities in keeping with the Sikh religion and will even include cookery classes.

The court in Buckingham Road, Ilford was purchased last week for just under £1.5million.

Harmander Singh, 53, who is himself a magistrate and whose father helped found the gurdwara, said: “We are not a community group, we are a faith group and we want to ensure that remains the same but it will be for all members of the community.

“Redbridge has the third largest population of Sikhs in London so it’s better if we can spread ourselves out.”

The 8,000sq ft building will be in many ways an extension of the gurdwara, according to Mr Singh, and will be used as a reception space for large parties.

He said: “It will relieve pressure on the gurdwara when we have weddings and people turn up for breakfast. At the moment they are sharing the space with the congregation, now they will be able to use the court building.”

All activities in the new building will be in accordance with the Sikh faith and as a result will mean that things like gambling and drinking will be banned.

“The Sikh ethos is to be good, work hard and share with others,” Mr Singh said. “Everyone who follows these basic rules can use the building. We will have public awareness campaigns and cooking classes.”

Leaders at the gurdwara hope all the refurbishments will be completed by April at the latest.

“There’s already parking there and we are not changing the use as it was already a public building, it’s just to relieve pressure on the gurdwara.