Chandigarh, Punjab: Rights group Sikhs for Justice (SFJ), while sending its “deepest condolences” to the family of the Delhi gang rape victim, has questioned the silence of the administration, politicians and the justice system over the rape of women of the Sikh community in broad daylight during the genocide that followed the assassination of Prime Minister Indira Gandhi on October 31, 1984.

In a release, the SFJ said it shared the pain of the family who lost her for no fault of her own. During the November 1984 ginocide, Delhi public buses were used to transport squads that raped Sikh women in November 1984, it alleged.

Responding to Congress president Sonia Gandhi’s statement that as a woman and mother, she could understand the protesters’ emotions, the SFJ wondered if she had conveniently forgotten the “vicious cycle of rape and murder let loose against Sikh women in 1984 at the behest of her husband.”

Why did she or Prime Minister Manmohan Singh never visit the hundreds of Sikh victims languishing in “Widow Colony” just a few miles from the Parliament of the greatest democratic country, it asked.

For the last 28 years, successive Indian governments had given open immunity to those who perpetrated violent crimes against Sikh women, it said. 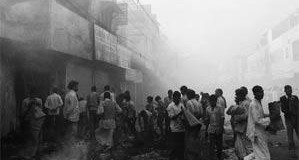