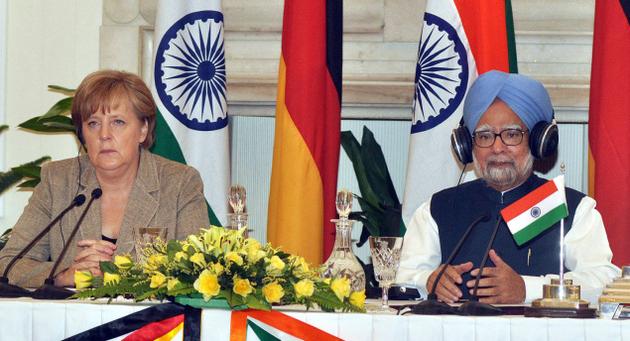 Berlin, Germany: The Indian Prime Minister Manmohan Singh will be visiting Germany on Wednesday for a 3-day visit. He will hold talks with German Chancellor Angela Merkel in Berlin from Wednesday. The main purpose of his visit is to get support for the India-European Union Foreign Trade Agreement (FTA).

The negotiations between the EU and India began 6 years ago in April 2007 and so far twelve rounds of negotiations have been held. The negotiations have been controversial and mostly held behind closed doors. Reportedly, one of the main roadblocks has been the EUs insistence on including non-trade issues (human rights issues and environmental and labour standards) in the FTA, to which India is strictly opposed. The EU continues to insist that India should improve its human rights, labour standards and animal welfare issues, amongst other non-trade concerns.

On 21 November 2012 India ended its unofficial eight-year moratorium on the death penalty when it hanged Ajmal Kasab. The Sikh Federation (UK) and its human rights wing Khalsa Human Rights have increased communications with the European Commission in Brussels and exerted greater pressure through Members of the European Parliament (MEPs) regarding the death penalty in India and other human rights concerns.

On 21 January 2013 the Sikh Federation (UK) led an EU-wide delegation of Sikh representatives in a meeting in Brussels with European Commission officials dealing with human rights and India. Following this meeting Baroness Catherine Ashton, the EU Foreign Affairs Commissioner met the Indian Foreign Minister on 30 January 2013. The planned India-EU Summit in Brussels that Manmohan Singh was to attend in February 2013 to finalise the FTA was then postponed for later in the year.

Since then India has again carried out the death penalty on 9 February 2013 by hanging Afzal Guru. In addition, Pranab Mukherjee, India’s President, has broken all records and now ordered the death penalty for fourteen convicts in the last nine months. On Friday 5 April Amnesty International issued a world-wide Urgent Action appeal (UA 85/13: India: Indian prisoners at risk of imminent execution) that includes Balwant Singh Rajoana.

We have contacted Sikh representatives in Germany about Manmohan Singhs visit later this week and were in Frankfurt a week earlier urging Sikhs in Germany to increase political pressure on the German Government regarding Professor Davinderpal Singh Bhullars case given the German authorities illegally deported him in January 1995.

This is an excellent opportunity for Sikhs in Germany to join forces with Amnesty International and other international human rights groups to exert maximum pressure on the German Government to take up the issue of the death penalty and human rights abuses with the Indian Prime Minister.

In addition, this is an opportunity to work with anti-censorship groups and civil liberty groups in Germany about the controversial decision by state governments to ban the film Saada Haq in Punjab, Haryana and Delhi despite approval by the Censor Board. This is another violation of basic human rights on freedom of expression and cannot be justified.

Manmohan Singh needs to get a very clear message from the German Government and those living in Germany, including Sikhs, that its human rights record is getting worse and will not be tolerated by Member States of the European Union.