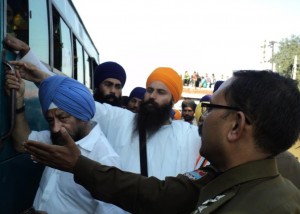 Dehradun: Sikh devotees marching from Punjab to Haridwar on Tuesday for rebuilding Gurdwara Gyan Godri Sahib were arrested at the Kulhal check post on the border of Himachal Pradesh and Uttarakhand. A few who managed to slip through were caught later.

Led by Baba Baljeet Singh Daduwal, nearly 400 devotees had come to the check post around 1pm under preannounced programme and tried to enter Uttarakhand.

Mild pushing against the police cordon turned into an exchange of blows with the cops, and a policeman was injured in the clash. Vikasnagar circle officer SK Singh confirmed that 290 Sikhs had been arrested and, later, released at Sri Guru Ram Rai Public School, Sahaspur, upon their furnishing personal bonds.

On Sunday, 47 members of the All-India Sikhs Conference ( AISC ) we redetained at Haridwar on way to Har Ki Pauri for kirtan on Gurpurab. Gurdwara Gyan Godri at Har Ki Pauri commemorates the visit of Sikhism’s founder, Guru Nanak Dev, to the spot in the year 1504-05.

It is alleged that in 1978, the earlier gurdwara was demolished for the area’s beautification and, in 1984, the site handed over to the Scouts and Guides mission. The AISC had also submitted documents to the Haridwar district administration to prove that it the land belonged to the Sikh community. 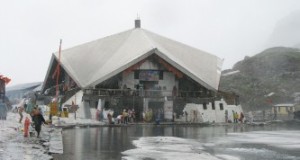