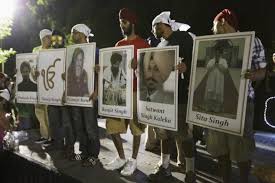 Washington, USA: The Sikh community in the US has welcomed the announcement of the Barack Obama administration to provide financial help for those affected by the Oak Creek gurdwara shooting.

They also appreciated the decision by the US to initiate a mechanism for the tracking of hate crimes in the US.

“This gesture means a lot to Sikhs across the US. The community is grateful for all the support and assistance by the US government and it sends an important signal that Sikhs are considered an integral part of the US,” Sikh Council on Religion and Education (SCORE) chairman Rajwant Singh said.

On Friday, US attorney general Eric Holder announced a grant of $5.12 lakh (around R3 crore) to the Wisconsin state government to pay for mental health and trauma services for those affected by shooting, including relatives of victims, witnesses and first responders.

On August 5 2012, Michael Wade Page, a white supremacist, walked into Milwaukee Sikh gurdwara and fired 19 shots, killing six worshippers and wounding five others. After being fatally wounded in parking lot by a police sniper, Page then shot and killed himself.

Ahead of the first anniversary of the incident, Holder announced that FBI had added Sikhs to the list of groups they track hate crimes against.

$1M DONATIONS TO BE EVENLY SPLIT
Survivors and families of victims of the Wisconsin gurdwara shooting have vowed not to let money divide them, after donations worth $1.1 million (around R6.7 crore) poured in from the US, India, Canada, England and elsewhere, agreeing to evenly split the amount.

According to The Washington Times, different life circumstances raised difficult questions on whether the families deserved an equal share of money or should the families of younger or higher-earning victims receive more. In the end, on the advice of an outside counsel, gurdwara leaders divided it equally among all six families in a controversy-free decision, the report said.

Each family’s total amounted to more than $1.25 lakh (about R75 lakh), the report added.