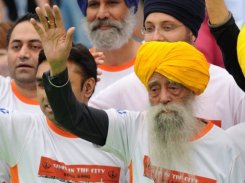 Sikh believed to be the world’s oldest distance runner,101, retires

Comments Off on Sikh believed to be the world’s oldest distance runner,101, retires 272 Views

Fauja Singh, nicknamed the “Turbaned Tornado”, finished the 10-kilometre (6 mile) run at the Hong Kong Marathon in one hour, 32 minutes and 28 seconds — half a minute faster than at the same event last year.

“Today is one of my happiest days,” the Indian-born British national, who only speaks Punjabi, said through his interpreter after he crossed the finishing line with a broad smile and waving the Hong Kong flag.

“I felt so fresh and so good. I felt I’m full of power today.

“I will remember this day and I will miss it, but I will not stop running for charity,” added Singh, who was mobbed by supporters when he completed his final competitive event, weeks before he turns 102 on April 1.

The centenarian, a farmer in his home state of Punjab before settling in England, became an international sensation and made headlines worldwide after he took up the sport at the ripe age of 89.

He has since completed nine 42-kilometre (26 mile) marathons in London, Toronto and New York. His best time was in Toronto, where he clocked five hours, 40 minutes and four seconds.

The great-great-grandfather has said that while he is quitting competitive events, he will not stop running for personal fitness.

In Hong Kong Sunday he ran with 100 supporters from a community group “Sikhs in the City”, forming a group of 101 to mark his age.

Group member Karamjit Singh said the runner was in top form throughout on a breezy and slightly overcast morning in the southern Chinese city.

“Apart from a toilet break at about 6 km into the run and at one point he nearly slipped due to wet ground, he did not stop, he just kept on going,” Karamjit, a nurse who lives in Hong Kong, told AFP.

The 101-year-old, who has attributed his longevity to a positive attitude and simple lifestyle, was in high spirits and cracked jokes with journalists several times after finishing the race.

“Actually I was expecting a much faster (finishing time),” he laughed.

“When I reached mid-point, people reminded me that it was halfway already, though I thought it was only one-third of it,” said Singh, whose name Fauja means “soldier”.

Singh was inspired to take up marathons after he saw television coverage of one 12 years ago. It was not long after the death of his wife and a son, at a time when he said he needed a new focus in life.

Although widely regarded as the world’s oldest marathon runner, Guinness World Records has not certified him since Singh cannot prove his birth date.

He has said there were no birth certificates available when he was born under British colonial rule.

But Singh has won widespread accolades.

He was a torchbearer for the 2004 Athens games and last year’s London Olympics, and appeared in advertisement for a major sports brand several years ago alongside the likes of David Beckham and Muhammad Ali.

His trainer has said Singh will continue his routine of running 16 kilometres a day even after retirement from competitive events.