Shocked To See Attempt To Ban Turban In Quebec

Comments Off on Shocked To See Attempt To Ban Turban In Quebec 1,009 Views 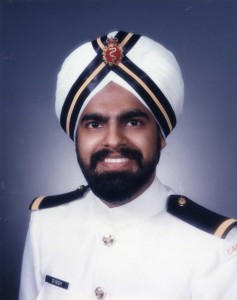 I, as a Royal Canadian Navy Veteran was shocked to see a bill being tabled for vote in the Quebec Legislature, Canada last week that bans Sikhs from wearing their turbans, Muslims their headscarf called nijab, Jews their Kippah(skullcap), and Christians large crosses.

In a country, such as Canada,which guarantees religious freedom in the constitution, this is a disgrace. I served 9 years in the Royal Canadian Navy and was the first Sikh to wear a turban in the Navy. This was approximately 27 years ago now. I volunteered to fight in the Persian Gulf War. I did not put my life on the line for this country to now have my right to religious freedom taken away from me.

The bill tabled in the Quebec legislature will require all Sikh civil servants working for the Quebec provincial government to remove their turbans if they want to keep their job as a teacher, policeman, fireman,etc. We have fought hard in Canada for the right for Sikhs to wear their turban in all aspects of our life as required by our religion for baptized Sikhs. We have won the right to wear turbans in the RCMP, Royal Canadian Navy, Royal Canadian Air Force, Canadian Army,Vancouver City Police, Delta City Police, Construction job sites, motorcycle riders, and the list goes on. Now we have an attempt to start to strip away these hard earned rights.

I have spent an hour on this article and have made myself 1 hour late for work because the rights of our Sikh community, the Muslim community, the Jewish community and the Christian community are worth it. I call upon all those who feel as I do to take time out of your busy lives and sent a letter to your Member of Parliament, Member of your Provincial Government,your local newspaper and express your views as I have.

Together we are like an unbreakable fist but on our own we are like sticks easily broken in two, my Punjabi mother used to tell me like all Punjabi mothers tell their sons and daughters. The Constitution of Canada which over-rides the powers of all governments in Canada protects our rights for religious freedom.