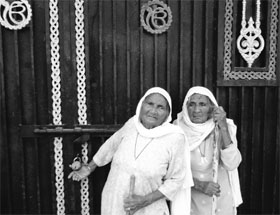 Comments Off on Shattered, Bhullar’s village not to celebrate Baisakhi 563 Views

Village menfolk gathered at the local gurdwara on the Barnala road. They later blocked the highway in protest against the court ruling.

They spoke of the sacrifices made by his grandfather Jagir Singh during the freedom movement for which he was honoured with a Tamra Patra.

There will be no Baisakhi celebrations in the village with the elders deciding against it.They have decided to approach SGPC chief Avtar Singh Makkar to seek his intervention.

They want him to persuade the Punjab Government to take up Bhullar’s case with the Centre as was done in the case of Beant Singh’s assassin Balwant Singh Rajoana.

Mohinder Kaur said she had returned to the village yesterday after attending Akhand Path in memory of Bhullar’s father in Amritsar. She said when she met Bhullar in Delhi’s Tihar Jail two years ago, he looked a physical and mental wreck.

Sharanjeet Kaur, another relative, was in tears as she watched TV channels running news about the Supreme Court order.

Bhullar’s cousin Mukhtiar Singh claimed that his leg had to be amputated after he was grievously injured during police interrogation near Chandigarh following the car bomb attack on the Congress headquarters in Delhi.

He alleged that Bhullar’s father Balwant Singh and his maternal uncle Manjeet Singh were tortured to death by the police and their bodies were never handed over to the family. He said Bhullar’s mother Uphar Kaur and brother Tejinder Singh had migrated to the US, fearing police harassment. Bhullar’s wife Navneet Kaur seldom visited the village.