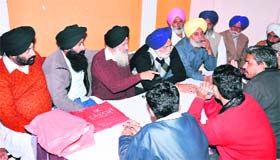 SGPC wakes up to woes of Sikhs abroad

Amritsar, Punjab: Finally, waking up to the need of spreading awareness about Sikhism on foreign shores, the SGPC has decided to set up a Sikh mission on 14 acres of land in California, US.

The SGPC move comes within days of a survey by Sikh American Legal Defence and Education Fund (SALDEF) and Stanford University that 49 per cent Americans believe “Sikhism” is a sect of Islam.

Talking to The Tribune, SGPC chief Avtar Singh Makkar said a four-member delegation headed by him would leave for the US on September 25 to carry forward the process for establishing the Sikh mission there.

He said the land documents were ready. He said the main aim behind the mission was propagation of Sikhism and building up a supply line for sending Sikh literature abroad, besides ensuring visits of ‘ragis’ and preachers to foreign countries.

He said they also planned to educate NRIs’ children on Sikh tradition and culture and the Punjabi language. The mission would play a key role in redressing various issues faced by the US Sikhs on account of mistaken identity and security barriers.

The SGPC planned to form a team of research scholars to prepare a multi-lingual literature to spread awareness on the Sikh religion.

This is not the first attempt by the SGPC to set up a Sikh mission in the US. It had earlier planned to take over a gurdwara in the US, which was facing a financial crisis, and house the mission there. However, this could not materialise. The SGPC had tried to set up a printing facility for Guru Granth Sahib in North Carolina, US, with Gurdwara Sahib Charlotte offering it 2.5 acres of land for the purpose. However, there could be no headway.

The project, with an estimated cost of Rs 5 crore, would have been the first such facility outside India.

Meanwhile, radical Sikh outfit Dal Khalsa has welcomed the SGPC move to set up the mission in the US. Party leader Kanwar Pal Singh said the SGPC had finally responded to the long-pending demand of the Sikhs.

He said the SGPC should hire the services of learned Sikhs abroad to help dispel wrong notions on the Sikh identity. Referring to a survey, he said it was ironic that in India, Sikhs were being clubbed as “part of the Hindu religion” whereas in the eyes of Western people, they were being viewed as a “sect of Islam”.