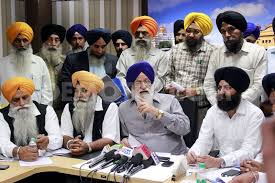 Comments Off on SGPC to fund education of baptised Sikh students till Class XII: Makkar 115 Views

Amritsar, Punjab:  SGPC president Avtar Singh Makkar has announced that a committee will facilitate free education till Class XII for baptised Sikh students belonging to baptised families in the SGPC-run institutions. Talking to mediapersons here today, Makkar said those wishing to avail the facility will have to certify every year that they are baptised. He said the SGPC had already set up hockey academies in Patiala, Faridkot and Amritsar, to curb apostasy among the young generation. He said around 1,200 players participated in selection trials, out of which 120 would be trained and their expenditure would be borne by the SGPC.

He said those selected had given an undertaking that they would follow the tenets of Sikhism honestly. He said the hockey team being prepared by the SGPC would only have “saabat soorat” (ones with unshorn hair) players. Talking about Sikh girls from Jammu and Kashmir, he said the SGPC would facilitate free education of five girls each in degree and diploma courses in the SGPC-run institutions every year. He said they had also got a specially designed vehicle which ccould showcase 500 books at a time for promoting Sikhism in Haryana.

Makkar said an SGPC jatha would visit Pakistan for observing the martyrdom day of Guru Arjan Dev on June 12. They already had a word with the Pakistan High Commission regarding visas to jatha members, he said.

Makkar said: “The SGPC jatha will take up the matter of amended Nanakshahi Calendar with the Evacuee Trust Property Board (ETPB) in Pakistan, which looks after gurdwara affairs there, and try to convince them to allow the jatha to observe the event on June 12. If they are convinced, we will hold an akhand path at Gurdwara Dehra Sahib in Lahore to mark the event”.

Previous: PROFESSOR BHULLAR MUST NOW BE RELEASED – SIKH FEDERATION (UK)
Next: Biggest international Sikh fest in Malaysia on May 30