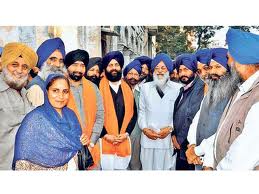 Comments Off on SGPC takes expert help on scriptures 284 Views

Chandigarh: The Shiromani Gurd war a Parbandhak Committee (SGPC) on Wednesday consulted archival experts from Hyderabad and Patiala for preserving remains of Sikh scriptures that were damaged during Operation Bluestar in 1984.

The artefacts would also be digitalised as part of the preservation measures, it was decided at the SGPC executive meeting held here.

SGPC president Avtar Singh Makkar, who chaired the meeting, said the committee also decided to conduct a fresh archaeological survey of all historic gurdwaras and take steps to conserve such shirnes.

The meeting appreciated the SGPC task force for its relief measures such as distribution of food and transporting them to safer destinations during the natural calamity in Uttarakhand last month.

In another resolution, SGPC criticised the UPA government, and specifically the University Grants Commission, for restricting the Punjabi language to only three colleges in the Delhi University’s freshly introduced four-year degree programme. “This is a conspiracy of the ruling Congress at the Centre to do away with the Punjabi language at the academic level,” said a resolution adopted at the meeting.

Tagged with: Operation Bluestar in 1984. sgpc

Previous: HC seeks replies to Sarna’s plea
Next: Artist’s ambitious project may get fillip from CM