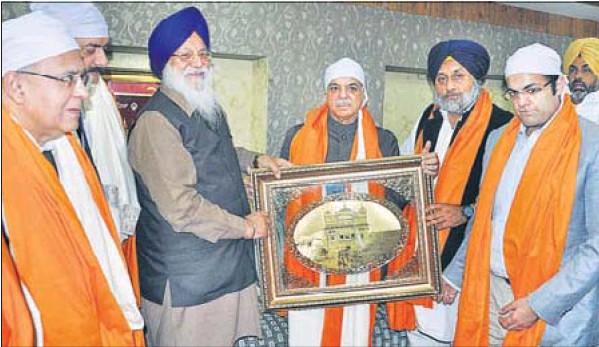 Amritsar, Punjab: The Shiromani Gurdwara Parbandhak Committee (SGPC) sought an active role in the ‘samb and sambal’ (management and preservation) of Sikh shrines and monuments in Pakistan.

These views were aired by SGPC chief Avtar Singh Makkar during a brief interaction with Pakistan Punjab chief minister Shahbaz Sharif prior to his departure from the Golden Temple here on Sunday.

Sharif, along with wife Nusrat, son and other relatives, paid obeisance at the Harmandar Sahib, just before rounding off his three- day Punjab visit during which he also visited his ancestral village, Jati Umra, in adjoining Tarn Taran district. He left for Lahore by a Pakistan Air Force plane from the Raja Sansi airport late in the evening.

The SGPC chief honoured Sharif with a ‘siropa’ and presented a large-sized picture of the Golden Temple and a set of Sikh historical books, including one on the Sikh shrines in Pakistan. Sharif’s wife and other members of his entourage were
also honoured with ‘siropas’.

SGPC DEMANDS
Makkar appealed to the visiting dignitary that all Sikh historical monuments needed to be preserved and that their character should not be altered. He made this appeal after pointing out that the SGPC had information that a commercial complex was proposed to be built at the site where the ‘haveli’ of Maharaja Ranjit Singh currently stands.

“We asked Sharif sahib to preserve this important monument as it was very dear to Sikhs. We also stressed upon the need for preserving and conserving all such monuments and buildings,” said Makkar while briefing the media on his talks.

“I told Sharif that the SGPC and the Pakistan SGPC could work in close coordination.

Makkar was also keen that the Pakistan government should allow the SGPC to perform ‘kar sewa’ of historical gurdwaras. In this context, he told Sharif that many of the gurdwaras were in desperate need of repair and needed to be renovated.

Makkar also stressed upon the need for building more serais for visiting pilgrims to Pakistan gurdwaras. He said the SGPC would be ready to offer its services for this task.

During his talks with Sharif, the SGPC chief also brought up the demand of having a corridor from the Indian border in the Dera Baba Nanak sector to the gurdwara in Kartapur Sahib in Pakistan.

“Pilgrims in India could make use of this corridor, which will be a 4-km stretch, to pay obeisance at Kartarpur Sahib. I told Sharif that this demand had already been discussed at the government level between the two nations,” stated Makkar.

Makkar also apprised Sharif of the manner in which the Pakistan High Commission in New Delhi often pruned down the list of pilgrims that was sent by the SGPC via the Indian union home ministry. The list, along with the passports of the pilgrims, is sent in advance for grant of visas to the high commission, so that those interested can undertake a pilgrimage to the Sikh historic shrines in Pakistan.

“I told Sharif that there should be no large-scale rejection of visas by the high commission. Of course, certain visas can be rejected if it was necessary,” said Makkar.

Asked about Sharif ’s reaction, Makkar claimed, “He was very positive and asked Sukhbir Badal to send a charter of these demands to him and he would take it up at the appropriate level.” He said the SGPC would prepare a detailed note and submit it to the deputy CM soon.