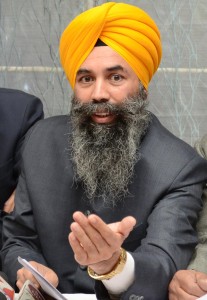 Amritsar,Punjab: The Akal Takht and Shiromani Gurdwara Parbandhak Committee (SGPC) have demanded Centre’s intervention in ensuring safety of their community members in Pakistan. The demand has come in the wake of beheading of a 40-year-old Sikh man in Pakistan’s tribal region on Wednesday.

Akal Takht Jathedar Giani Gurbachan Singh on Thursday said the beheading was one of the most heinous crimes committed against minorities in Pakistan and that India should raise this issue. “The Union government should immediately take up the issue with Pakistan to ensure safety of Sikhs of Pakistan,” said the jathedar.

Terming the incident as most barbaric and gruesome, SGPC president Avtar Singh Makkar said the government should take up the issue of safety of Sikhs with Pakistan government on a priority basis. Mohinder Singh, who was abducted over a month ago in the Khyber region by a militant group for allegedly spying for another rival group, was beheaded and his mutilated body was dumped in a market in Khyber.

Meanwhile, United Sikhs, a UK-based NGO, has sought compensation for the victim’s family besides safety of minority communities and have also cautioned Sikhs travelling in Pakistan.

Manvinder Singh, advocate, United Sikhs, told TOI on Thursday that Mohinder Singh was kidnapped from his shop in Tabbai village of Khyber Agency by unidentified armed men on November 20, 2012.