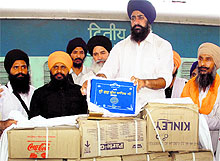 Comments Off on SGPC, Satkar panel at loggerheads again over transportation of religious books 531 Views

Amritsar, Punjab: The issue of the manner in which holy books are transported from one place to another has once again brought the SGPC (Shiromani Gurdwara Parbandhak Committee) face to face with Sri Guru Granth Sahib Satkar Committee.

“The way the committee is policing around, it will create terror among people and will distance them from Gurbani,” he said. He also demanded that the case registered by the railway police should be cancelled. He said they will also approach the police commissioner for getting an FIR registered against the committee.

The SGPC chief has also taken a serious note of a city-based firm selling religious books to a paper mill. He said the matter was being probed into and the SGPC will initiate action against the guilty as per law.

In a related development, Akal Takht Jathedar Giani Gurbachan Singh said they would investigate into the matter of transporting religious literature to Lucknow. He said if it was found that the literature was being sent in a proper manner, they will act against those raking up a controversy unnecessarily.

On the other hand, Satkar committee leader Balbir Singh Muchhal alleged that it was a clear case of desecration. “It is unfortunate that religious leaders are wrongly projecting us as mischievous elements,” he said.

It was yesterday that the Satkar committee had seized religious literature from the Amritsar railway station while it was being sent to Lucknow. It had alleged that it was being transported in a sacrilegious manner. Subsequently, the railway police had registered a case on their complaint.