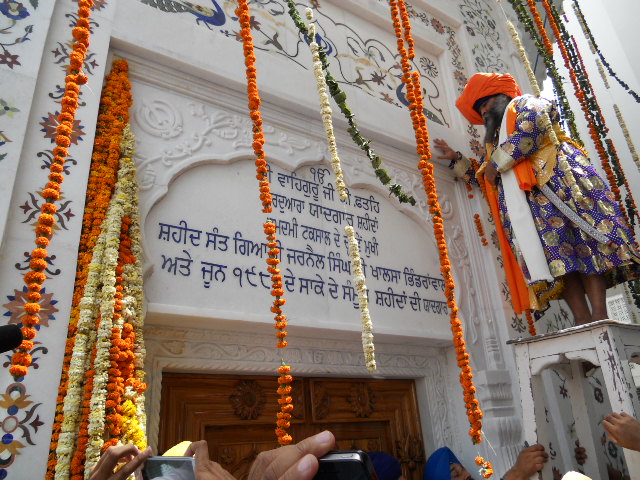 Amritsar, Punjab: The Shiromani Gurdwara Parbandhak Committee (SGPC) today removed a wall clock with the photograph of Jarnail Singh Bhindranwale inside Operation Bluestar Memorial and replaced it with
another one.

There has been tension between the SGPC/SAD and the Damdami Taksal with the latter dedicating the memorial to Bhindranwale and other “martyrs” of Operation Bluestar.

Earlier, the SGPC had turned around a “golak” at the memorial with Bhindranwale’s name inscribed on it.

There are five more sites where Sant Jarnail Singh Khalsa Bhinderanwalay’s name remain engraved- two marble plaques atop the memorial entrance, two aluminum plaques on both sides of the staircase leading to the memorial and another mentioning the history of Operation Bluestar on the left side of the entrance.

Meanwhile, with Akal Takht Jathedar is avoiding to get involve in this issue and currently is in New Delhi.

Concrete steps to resolve the issue were expected only after the return of Giani Gurbachan Singh. Dhuma too has indicated to some of his close associates that he would visit Amritsar once the Akal Takht Jathedar returns.

Meanwhile, Makkar is said to be keeping a close tab on the developments and has held consultations with Mehta, who remained present by his side all through the day. The SGPC chief is keen to wriggle out of the situation by finding a solution and obeying all orders that comes straight from Badals. According to media, entire issue has caused embarrassment to Shiromani Akali Dal. Fanatic radical national party ‘BJP’ has gone to the extent of demanding Badal government’s intervention to remove Bhindranwale’s name from the memorial.