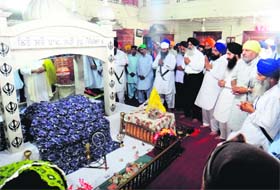 Amritsar, Punjab:  The SGPC executive committee gave its approval for the preservation of historic ‘birs’ of Guru Granth Sahib during its meeting held in Chandigarh today. SGPC chief Avtar Singh Makkar said the ‘birs’ that bore bullet marks of Operation Bluestar in 1984 and Saka Nankana Sahib in 1921 will be preserved in consultation with conservation experts from Hyderabad and Patiala.

He said they would discuss the issue with conservation expert SP Singh from New Delhi and if needed, these ‘birs’ would be preserved in a digitised format. He said the SGPC panel had completed its probe into the thrashing of bureaucrat KS Pannu in Uttarakhand and the report had been submitted to the Akal Takht for further action.

He said the SGPC would extend all possible aid to the Uttarakhand flash flood victims, for which they had allocated Rs 1 crore. The SGPC has also written a letter to PM Manmohan Singh and Union Telecom Minister Kapil Sibal to curb the instances in which either the photographs of Sikh gurus were being tampered with or derogatory language was being used against them on social networking websites.

Previous: Displaced during Op Bluestar, traders yet to be rehabilitated
Next: Approach roads to Golden Temple cry for attention