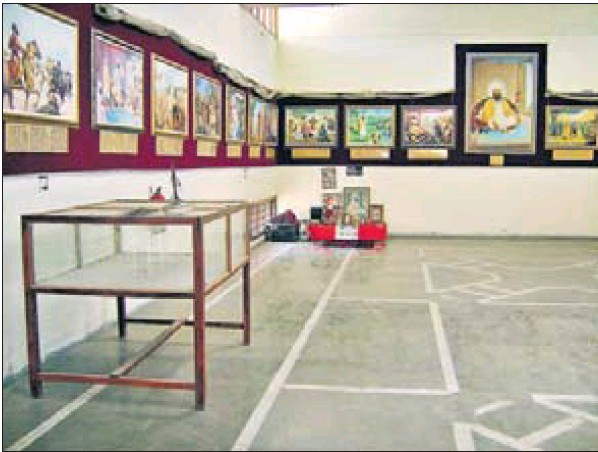 Karnal, Haryana: Peeved about the neglect of two museums dedicated to Sikh gurus, the Shiromani Gurdwara Parbandhak Committee (SGPC) wants to run them.

Located near the HaryanaDelhi border on the national highway-1, the Barh Khalsa Memorial Museum was established in the memory of ninth Sikh Guru Teg Bahadur, while the Guru Gobind Singh Martial Art Museum is situated near the famous pilgrimage Kapal Mochan, Yamunanagar.

In December 2012, Hindustan Times had highlighted the plight of the two museums.

Built to commemorate the tercentenary celebrations of Sikhism more than a decade ago, the two museums dedicated to the last two gurus have fallen prey to the Haryana government’s apathy.

Raghujit Singh Virk, senior vice-president of the SGPC, told HT that the Sikh body would soon meet chief minister Bhupinder Singh Hooda to urge him to handover the museums to the apex religious body of Sikhism. He said that the SGPC would spend any amount of money to renovate and run these places of high religious importance for the community.

“Barh Khalsa and Kapal Mochan are associated with the Sikh gurus but the Haryana government has failed to maintain them. People are not even aware that these museums exist. The two museums are poorly maintained and no effort has been made to popularise them,” Virk said. The administrations of the two districts had constructed the museums and managed them till they were handed over to the archeology department in June 2011.

The state archaeolog y department, which has meager funds at its disposal, is running the museums with ad-hoc staff.

The Barh Khalsa museum complex houses the agriculture department office of Rai block and museum is poorly maintained. Though it has a spacious sarai, it remains unused as no one visits the museum.

■ Barh Khalsa Memorial Museum (above) was built in memory of Guru Teg Bahadur and is located near the Haryana-Delhi border in Sonepat; and Guru Gobind Singh Martial Art Museum is situated near pilgrimage spot Kapal Mochan in Yamunanagar.

ONLY PHOTOS ADORN WALLS:
In the name of artifacts and personal belongings of the Sikh gurus, both museums have only photographs giving brief references of the gurus, their families and prominent followers. Barring a few symbolic weapons, the Guru Gobind Singh martial arts museum has no original weapons used by the gurus.

Kapal Mochan is considered to be holy as it is believed that Guru Nanak Dev and Guru Gobind Singh had visited the place.

BARH KHALSA MUSEUM:
According to the popular belief, after ninth Sikh Guru Guru Teg Bahadur was beheaded by Muhgal emperor Aurangzeb for not converting to Islam, his head was first taken to a village, now known as Barh Khalsa, by Bhai Jaita Singh before it was taken to Anandapur Sahib for final rites.

The then chief minister Om Prakash Chautala had laid its foundation stone on December 22, 2001. After taking over it from the Sonepat district administration in May 2011, the archeology department again wants the administration to run the museum with the help of a local committee.