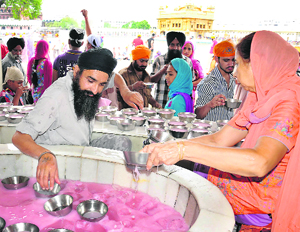 Amritsar, Punjab: Even though a few members of the SGPC jatha today observed the martyrdom day of Guru Arjan Dev at Gurdwara Dehra Sahib in Lahore as per the amended Nanakshahi Calendar, the event also brought bitterness between the SGPC and the Evacuee Trust Property Board (ETPB), which looks after gurdwara affairs in Pakistan, and the PSGPC to the fore.

Talking to The Tribune on phone from Pakistan, SGPC jatha head Rampal Singh Behniwal said though the event was to be observed at Gurdwara Dehra Sahib, the ETPB scheduled the jatha’s visit to Gurdwara Panja Sahib. Consequently, a majority of jatha members left for Gurdwara Panja Sahib while a small group managed to reach Gurdwara Dehra Sahib. He alleged that all this was done under a pre-planned plot to keep the jatha away from the event.

SGPC president Avtar Singh Makkar slammed the ETPB and the PSGPC and termed the incident as “shameful”. There were also reports that the members of SGPC jatha were not given accommodation at Gurdwara Dehra Sahib. Makkar said they would take up the matter with the Pakistan Prime Minister and Pakistan Punjab Chief Minister.

Behniwal said they had invited ETPB and PSGPC officials for talks over the issue.

He said he already had a word with ETPB secretary Khalid Ali and former PSGPC chief Mastan Singh. “I have explained to them the difference between the original and the amended calendar, besides highlighting the need for making amendments to it,” he said, adding a formal invitation for talks would be extended to the ETPB and the PSGPC after June 30.