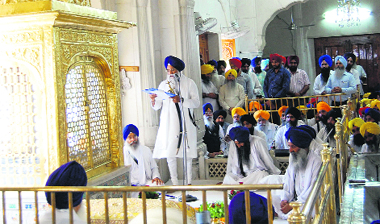 Amritsar, Punjab:  The 29th anniversary of Operation Bluestar, observed amid a row over the naming of Bluestar Memorial in the Golden Temple complex after Jarnail Singh Bhindranwala, passed off peacefully today.

The SGPC, treading with caution, did not make any departure from programmes held in the past to mark the event even as the Akal Takht chief, Jathedar Gurbachan Singh, refrained from making a mention of the memorial in his message to the community.

While SGPC president Avtar Singh Makkar chose to be seated inside Akal Takht, Damdami Taksal chief Baba Harnam Singh was seen sitting in front of Akal Takht with his followers. Both the leaders did not face the media and left the venue soon after the programme.

The SGPC task force was deployed in strength at the venue as well as the memorial. Supporters of SAD (Amritsar) president Simranjit Singh Mann repeatedly raised slogans in support of Khalistan after the programme ended.

There was a minor scuffle between Mann supporters and the SGPC task force when the latter stopped them from proceeding towards Akal Takht. Mann also paid obeisance at the memorial after delivering a speech on his Khalistan agenda. The SAD (Amritsar) alleged that one of its party workers, Sukhjinder Singh, was beaten up by the SGPC task force. However, Makkar could not be contacted for comment.

In his message to the community, the Akal Takht chief said that Operation Bluestar wounds were fresh even after 29 years of the Army operation. “If August 15 is the day of celebrations for the countrymen, June 6 is the day of grief for the Sikhs,” he said, blaming the country’s judicial and administrative system for alienating the Sikhs.

“On the one hand, preparations are being made to hang Devinderpal Singh Bhullar though there are no witnesses in the case and on the other the likes of Sajjan Kumar and Jagdish Tytler are being acquitted despite hundreds of witnesses against them,” he said.

He stressed the need for the Sikhs to unite on a single platform. He said the community had failed to put forth its side of the story before the nation. “The establishment has portrayed a wrong picture of the Sikhs and we need to tell the people that Sikhs made the maximum contribution to the freedom struggle.”

He asked the SGPC to enlist the help of historians and intellectuals to get a book on Sikh history published in different languages.

The Taksal put up an impressive show of strength at Chowk Mehta with thousands of devotees gathering at Gurdwara Guru Darshan Parkash. Langar and a free medical camp was organised for the devotees. Representatives of the Sant Samaj and the SGPC attended the function.

The second resolution stated that there should be no tampering with boards carrying the name of Bhindranwale. Addressing the gathering, the Akal Takht chief said differences with the Taksal over the memorial would be sorted out amicably.

* SAD (Amritsar) alleges its party worker was beaten up

‘Golak’ turned around
When SAD (Amritsar) chief Simranjit Singh Mann went inside Bluestar Memorial to pay obeisance, his supporters turned around the ‘golak’ with Bhindranwale’s name inscribed on it. But SGPC officials again turned it around after they had left the memorial premises