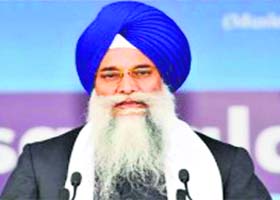 Amritsar, Punjab: Akal Takht Jathedar Giani Gurbachan Singh today said the sentence awarded to the assailants of Lt General Kuldip Singh Brar (retd) by a UK court was too harsh and asked the SGPC to take up the issue with the UK Embassy in New Delhi.

Talking to mediapersons here, the Jathedar said various Sikh organisations and members of the Sant Samaj had expressed displeasure at the punishment.

“The sentence handed out to the guilty is inhuman. All Sikh organisations are surprised at the verdict, which is one-sided. “There is a feeling that the verdict should be reviewed,” he said.

Asking the SGPC to take up the issue with the UK Embassy, he urged the Sikh Sangat to cooperate with the SGPC in the matter.

Avtar Singh Makkar, SGPC chief, also said the sentence was rather harsh. Earlier, Jasbir Singh Rode of the Sant Samaj, during his meeting with the Jathedar here today, expressed concern at the verdict.

A UK court had on Tuesday handed out jail sentence to four persons including a woman, ranging between 10-14 years. Mandeep Singh Sandhu and Dilbag Singh were sentenced to 14 years in jail, Harjit Kaur 11 years and Barjinder Singh Sangha 10 years and six months.

New Delhi: Delhi Sikh Gurdwara Mangement Committee president Manjit Singh GK on Wednesday said the sentence awarded in the Brar case was in “violation of human rights”. Manjit Singh, who heads the Delhi unit of the SAD, said: “Sikhs do not get justice either in India or abroad.” He claimed that those who had killed the Sikhs were being projected as heroes.