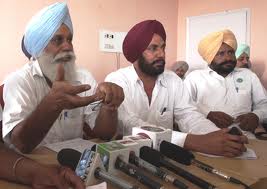 Amritsar,Punjab: The Sehajdhari (Patit) Sikh Party, a registered political party , has demanded that the Electronic Voting Machines (EVM) should have a separate button for rejection of candidates for the facilities of the voters.

In a two page letter written to the Election Commission the national president of the Sehajdhari Sikh Party, Dr.Paramjeet Singh Ranu has demanded that in light of the orders dated 10th March, 2011 of the Election Commission issued to the Chief Electoral Officers of Assam, Kerala, Tamil Nadu, Puduchery and West Bengal, similar directions be issued to the Punjab Electoral Officers during the Moga byelection regarding provisions of Rule 49 O of the conduct of Election Rules 1961, regarding electors deciding not to vote.

Ranu told TOI on Monday taht he had urged the Election Commission of India that in the interest of justice and to maintain the secrecy of voters, a voting button for rejection should be introduced in the voting machines, otherwise the exercise and the spirit of the law will be futile. He said that the provisions of the law can be practically enforced, only if the voting machine possessed a special button for the purpose of rejection which would also maintain the secrecy of the voter.

Previous: 1984 Genocide Victims Seek Further Probe Against Jagdish Tytler
Next: Sikhs troop in from France to protest at Hollande meet