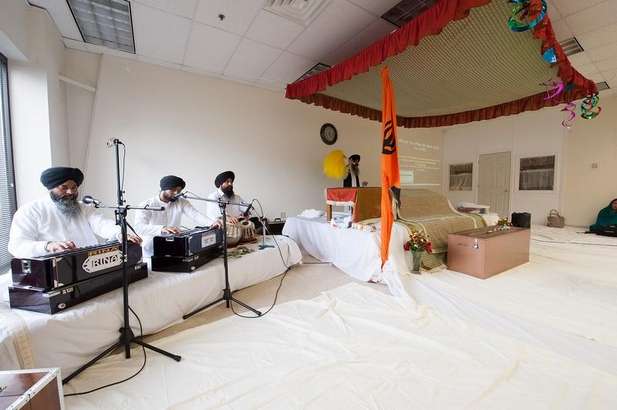 USA: From the outside, it looks like an ordinary building in an industrial park near Newark.

Inside, however, is something quite special to the Sikh community, Gurdwara of Delaware, the state’s second temple, which opened Sunday.

Many in the congregation that morning, young and old, wore a traditional style of dress. Turbans were wrapped precisely over long, uncut hair. Seated on the floor, the Sikhs sang in the language of their ancestors. They faced a platform where their holy book was covered by special cloths and a canopy.

Much about this day was centered on beliefs that originated in the 15th century in an area that is now northern India. The new temple is a reminder of Delaware’s evolving diversity of ancestry and religious beliefs.

Jagdeep Hundal, a physician who lives in Bear, moved here from Connecticut in 2008. His brother already lived in Delaware, and Hundal decided to join him because he found the area to be peaceful. His young children will grow up learning the language and beliefs important to Sikhs.

“It is keeping kids attached to their roots,” he said.

Sikhism is considered by some to be fifth-largest religion in the world, with more than 22 million followers in India. Fewer live in America, but the numbers are growing. There were an estimated 240 Sikh temples in 2010 with between 200,000 and 500,000 members.

Counting how many people identify with any religion is never precise, but there are ways to illuminate it.

The state’s first gurdwara, Sikh Center of Delaware, had 50 families on its mailing list in 2004 when it was located in a converted house in Elsmere. In 2011 they purchased a building on six acres of land in New Castle, and by then the mailing list had grown to about 170 families. Today, the mailing list includes more than 300.

The establishment of a second temple was started by Delaware Sikhs who prefer a more traditional approach to their religion. They want a more frequent rotation of elders, some at the new temple said. They are leasing the property for their gurdwara while they raise money to buy a building.

A second temple in the state is welcome, said Randeep Kahlon of the Sikh Center of Delaware.

“Each congregation develops its own personality,” he said.

This is not unlike what other immigrant groups have done in America. For example, many Catholic churches were established around pockets of ethic communities, which allowed people with a common background to worship with customs carried from their homelands.

About one in three of Delaware’s immigrants are from Asia. In New Castle County, more immigrants come from Asia than any other part of the world, including Latin America, according to the most recent Census figures.

It was rare to see Sikhs in Delaware when Narinder Singh Minhas moved here from New York in 1999. At the time, he knew of maybe five or six other Sikh families. They would get together in homes in the years before a temple was established.

Kahlon, a physician, said the state’s Indian community has grown because many have been been drawn here by jobs in technology and medicine. Some work in neighboring states, such as Pennsylvania, but choose to live in Delaware, he said.

Visitors from New York and New Jersey came to the grand opening of the new temple. They spoke during the service. A man from New York who operates a new Punjabi-language newspaper said he would run a free advertisement soliciting donations for the Delaware congregation.

Equality and service are defining beliefs for Sikhs, who rejected the caste system in India. There isn’t a hierarchy of clergy in Sikhism, and women always have been permitted to lead services. All sit on the floor during worship and meals, and services are open to anyone.

The holy book for the new temple was donated to Gurdwara of Delaware by a New York City congregation. It was made in the Golden Temple in Punjab, India. Three weeks of preparation went into carefully preparing the room for the holy book’s arrival. Some worked more than 16-hour days to make it happen.

The book, called the Guru Granth Sahib, is considered the highest spiritual authority and Sikhism’s 11th, and final, guru. It is the focal point in the temple. Anyone who enters the room must remove their shoes and cover their head. Followers bow before the holy book, placing their foreheads on the floor. Care is taken to ensure the book is kept pristine.

At the grand opening, three men dressed in white played instruments and sang. Men and women took turns clearing the air over the holy book with a chori sahib, a brush with a long plume of hair at the end. Children recited a hymn in Punjabi.

Some at the grand opening wore American-style clothing. English translations were beamed from a projector onto the wall.

Navina Kaur, an engineer who lives in Bear, said the English translations help those who are younger. The temple offers classes so children learn the language, she said.

It would not be surprising if a third temple opened in the next three to five years in Delaware, Hundal said.