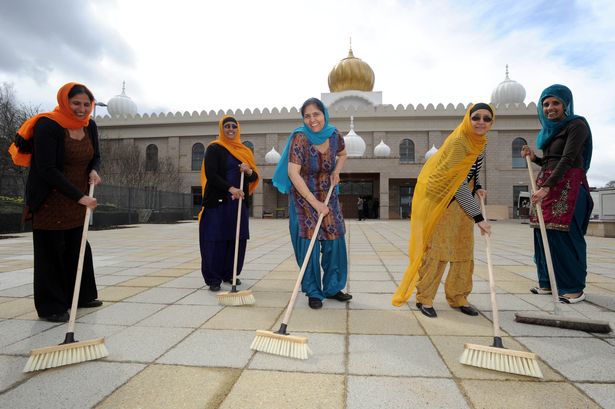 Scotland,UK: Thousands of Sikhs gathered for a colourful multi-cultural procession yesterday to herald the opening of Scotland’s largest Gurdwara.

More than 3,000 people formed queues ten deep to be among the first to see inside the spectacular new place of worship in Pollok­shields, Glasgow.

Volunteers prepared 10,000 chapatis, 3,000 vegetarian samosas and 15,000 cups of tea for visitors from all over Scotland and as far afield as London and Birmingham.

But organisers were still overwhelmed by the numbers who attended the historic opening of the £4 million temple, complete with an iconic golden globe.

The building officially opened as sacred Sikh scripturethe Guru Granth Sahib arrived on a throne aboard a carnival float.

Flower petals were scattered on it by the worshippers who had joined a procession from the old Gurdwara nearby.

The Nishan Sahib – Sikh flag – was then raised.

Members of the Sikh community were joined by representatives from other faiths and politicians from all parties, including Deputy First Minister Nicola Sturgeon.