New Delhi: The Supreme Court has refused to review its decision dismissing Khalistani terrorist Devinderpal Singh Bhullar’s petition to have his death sentence commuted on the ground of inordinate delay.

A bench headed by justice GS Singhvi, which had on April 12 dismissed Bhullar’s plea to commute his death sentence in the 1993 Delhi bomb blast case, rejected his review petition on Tuesday.
Bhullar, 48, had wanted his death penalty commuted on the grounds that the President had taken too long to decide on his mercy plea. The rejection of the review petition further pushes towards the gallows the man convicted 12 years ago for the bomb blast that killed nine people and injured 17, including then Youth Congress president Maninderjit Singh Bitta. The Supreme Court had said such a delay could not be cited to commute death sentences in terror crimes, unlike in case of murders committed due to personal animosity or property disputes.
If executed, Bhullar would be the third convict in terrorrelated cases to be hanged since November last year, the others being 26/11 convict Ajmal Kasab and Parliament attack convict Afzal Guru.
The Shiromani Akali Dal (SAD) — the ruling party in Punjab — and the Shiromani Gurdwara Parbandhak Committee had appealed to Prime Minister Manmohan Singh for the commutation of Bhullar’s death sentence to life imprisonment.

Punjab chief minister Parkash Singh Badal had said that the case deserved a review because of Bhullar’s deteriorating mental health and for the sake of communal harmony in Punjab and the rest of the country. 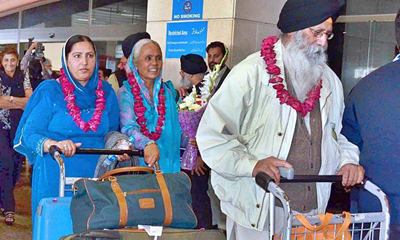 Sikh jatha to visit Pak under shadow of Taliban threat