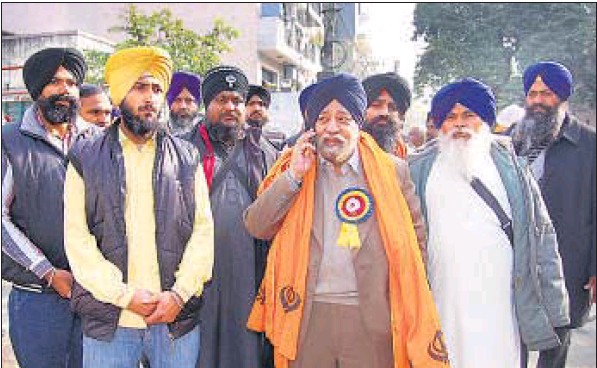 New Delhi: “Why are they (Badals) here? We will never allow these corrupt leaders of Punjab to loot the wealth of our gurdwaras here ( in Delhi)?” This was Shiromani Akali Dal ( SAD) Delhi chief and incumbent Delhi Sikh Gurdwara Management Committee (DSGMC) president Paramjit Singh Sarna’s message for Punjab chief minister and SAD- Badal patron Parkash Singh Badal on Sunday during campaigning for the January 27 DSGMC polls.

Sarna formally began the campaign from the gurdwara in Punjabi Bagh, his citadel for the religio- political hegemony that he has been enjoying as DSGMC president for nearly a decade now.

Sarna’s assertions came during his public meetings crisscrossing both the posh as well as semi-urban localities in northwest and outer Delhi.

He was on the offensive: “Badal has failed to safeguard the Sikh tenets, as 90% of the youth in Punjab are patit (nonbaptised Sikhs)”. “Even the grandchildren of many SGPC ( Amritsar- headquartered

Says even the kin of SGPC members from SAD- B are not baptised Shiromani Gurdwara Parbandhak Committee members from Badal’s party do not have beards and turbans,” he said, asking the voters, “How will you accept such a party for managing Sikh religious affairs?”

“Our role is not only to manage or administer gurdwaras, but also to safeguard the Sikh rehat maryada (religious tenets), in which Badal has totally failed.”

Countering Badal’s charge on him that he played in the hands of the Congress that “conspired the anti- Sikh carnage” in 1984, Sarna cross- questioned the Badal government’s role in rehabilitating those riot victims who had migrated to Punjab over 28 years back.

Taking out a letter of Akal Takht jathedar Giani Gurbachan Singh from his pocket as a trump card, he said the head priest had expressed his serious concern in the letter to Badal over the Punjab government’s “failure in allotting houses and jobs to nearly 3,000 victim families still struggling in Punjab”.

Asked about the DSGMC refusing to follow the Nanak shahi calendar as amended in 2009, Sarna said there was no unanimity on the matter among ja the-dars(high priests) of the five Sikh takhts ( temporal seats).

The Badals’ SAD, the ruling party of Punjab, has picked up the party’s youth wing chief in Delhi, Manjinder Singh Sirsa, to contest against Sarna. Manjinder’s wife is the local BJP councillor. “Every time, they look for a fresh face against me,” Sarna said with a smile.

“You look at the number of vehicles with Punjab ( registration) numbers here nowadays. Their only business here is to distribute liquor and use money and muscle power. And we will not allow them to do that,” Sarna said at a gathering hosted by a local Congress MLA from Nangloi in outer Delhi.

The swords, all in black sheaths, were beyond counting. And the fear was a probable clash as the cadres of the rival SAD- Badal stopped a school procession in Sarna’s favour on the argument that the Sarna group had no permission for the route being followed. Sarna was whisked away by the Delhi cops and his own fleet of security men after the altercation.

“Keep some swords in that vehicle,” someone had said from amongst the supporters, as Sarna began the day’s campaign. He was equally particular about the presence of a special taskforce vehicle of Delhi Police that was deputed with Sarna.After the clash at Gurdwara Rakabganj in November, the police have increased security strength for both the rival parties. “Our demand for a CRPF fleet has still not been met,” Sarna said.