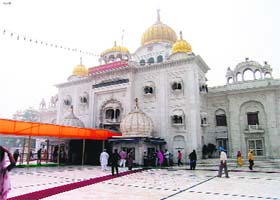 Sarna, Badal groups target each other as poll campaign picks up

Comments Off on Sarna, Badal groups target each other as poll campaign picks up 498 Views

Amritsar,Punjab: With the campaign for the Delhi Sikh Gurdwara Management Committee (DSGMC) elections picking momentum, the ruling SAD (Delhi) led by Paramjit Singh Sarna and the Parkash Singh Badal-led SAD are making all-out efforts to woo voters. The DSGMC is the second most important Sikh body after the Shiromani Gurdwara Parbandhak Committee(SGPC).

Sarna said they had been urging voters to draw a comparison between the working of the DSGMC and the SGPC. He claimed that the management of gurdwaras controlled by the DSGMC was far better than of those being run by the SGPC, with the exception of the Golden Temple.

He said educational institutions too were better managed by the DSGMC. “We have made concerted efforts to resolve Sikh issues at the national as well as the international level. The DSGMC has been propagating Sikhism in foreign lands by sending preachers abroad. On the contrary, under the SGPC, drug addiction and apostasy has been on the rise in Punjab,” Sarna claimed.

He alleged that the SAD had repeatedly violated the directions of the Akal Takht and he could quote several instances to prove his point.

On the other hand, the SAD’s Delhi unit chief, Manjit Singh GK, alleged that it was the DSGMC under Sarna that had been violating the directions of the Akal Takht, such as Gurpurb celebrations. Educational institutions run by the DSGMC were in a bad shape and corruption was rampant. Manjit Singh also alleged that the DSGMC had failed to get justice for the 1984 riot victims.

The SAD is also raking up the Gurdwara Bala Sahib controversy to target the Sarna brothers. The SAD alleges that gurdwara land was allotted to a private organisation for raising a hospital in violation of norms.

2013-01-15
Guest Writer
Previous: Sikh Student Federation appeals to Akal Takht not to attend ‘Maha Kumbh Mela
Next: Portland-area Sikhs step out to explain their faith to others