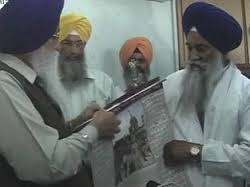 Comments Off on Sant Samaj: Revert to Bikrami calendar 593 Views

A delegation of the Sant Samaj comprising former Jathedar Bhai Jasbir Singh Rode and Baba Balbir Singh handed over a memorandum to the Akal Takht Jathedar. Talking to mediapersons, Rode said Nanakshahi calendar had created confusion among the community and Gurpurbs were being observed on different dates at different places.

“The stalemate over Nanakshahi calendar continues and therefore Bikrami calendar should be implemented as it will ensure that all the occasions are observed on the same date”.

Nanakshahi calendar, made by Pal Singh Purewal, was implemented in 2003. But, it was not accepted by Takht Sri Hazur Sahib, Takht Sri Patna Sahib and the Sant Samaj. Later, the calendar was amended in 2010, but it failed to resolve the differences. Prior to Nanakshahi calendar, Sikhs were observing their events as per Bikrami calendar.

During the meeting with the Jathedar, the Sant Samaj also demanded uniformity in “baani” for “amrit sanchar”. On the issue of Gurbaksh Singh, Rode said they agreed with the demand for the release of Sikh detainees, but they did not support the path adopted by him.