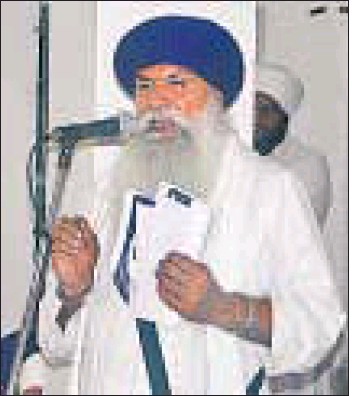 Amritsar, Punjab: The controversy surrounding the Operation Bluestar memorial took a new turn on Friday as a Sant Samaj faction led by Bhai Ram Singh dubbed the octagonal marble structure in the Golden Temple complex “incomplete memorial that fails to convey the message of sacrifices made by the ‘qaum’ (community) in its long struggle against repression and injustice.”

Appreciating efforts made by the Shiromani Gurdwara Parbandhak Committee (SGPC) in getting the memorial constructed, Bhai Ram Singh read out the resolution and stated that the memorial could not be termed appropriate as it failed to convey the message of the Sikh struggle to future generations.
Not favouring the demolition of the structure, the resolution stated that it should convey the entire history of the Sikh “struggle” starting from Sikh-Nirankari clash of 1978 in Amritsar to Operation Bluestar and Sikh genocide of 1984 etc.

“References should be made not just to Jarnail Singh Bhindranwale but to all those who perished along with him in the 1984 army operation. The names of those who died in the clash with Nirankaris, Sikh genocide in Delhi, Kanpur and other places and even those who were victims of police atrocities should be included on this memorial,” Bhai Ram Singh told mediapersons later.

He mentioned names of Beant Singh, Satwant Singh and Kehar Singh, involved in Indira Gandhi’s assassination, to be put on the memorial. “There should also be references to those who made sacrifices in this struggle, including the army deserters of 1984,” the faction leader added.

Bhai Ram Singh, who is still a member of the Damdami Taksal, had lost the race for the headship of the seminary to Harnam Singh Dhuma a couple of years ago. Despite staying away from the Taksal headquarters at Mehta Chowk for quite sometime, he felt that Dhuma had taken the right step by inscribing Bhindranwale’s name on the memorial despite “opposition” from the SGPC and the Punjab government.

“One name or photo will not suffice. We must have names and larger photos of all our martyrs,” he said.

‘INTERNAL MATTER’
Agreeing with the views of Akal Takht Jathedar Giani Gurbachan Singh and Dhuma, Bhai Ram Singh also termed the memorial an “internal issue of the Sikhs.” “The BJP, the RSS and the Congress should keep their hands off our issues. If they can have an airport named after Indira Gandhi (IGI international airport) and a memorial to Beant Singh (former Punjab CM), why can’t we have memorials to our martyrs,” he added.

He indicated that he would meet Giani Gurbachan Singh after his return to the city and put forth his viewpoint. The jathedar is currently abroad and is expected back next week.

Even as Dhuma, with the Sant Samaj’s backing, has rejected the demand to remove Bhindranwale’s name, a meeting of Sikh high priests on May 15 to discuss the issue failed to come up with a solution.

The clergy are seeking opinion from different sections before arriving at any solution. It is in this context that Bhai Ram Singh too is keen on putting forth his views before the Sikh clergy.

Previous: Biggest international Sikh fest in Malaysia on May 30
Next: Makkar hails DSGMC move on memorial