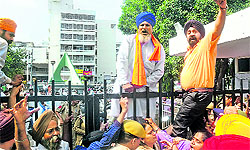 Delhi, India: A Delhi court today acquitted senior Congress leader Sajjan Kumar in one of the 1984 Sikh Genocide cases. The court, however, convicted five others for being part of a mob that killed five Sikhs in the Delhi’s Raj Nagar area. Genocide had broken out after the assassination of late Prime Minister Indira Gandhi on October 31, 1984. Rioters and mass murderers were given cash and provided police protection from Congress leaders of that time. 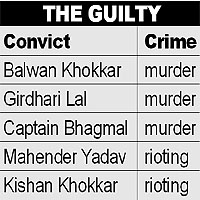 Just after the pronouncement of judgment, some of the witnesses, including Jagdish Kaur, her son Gurpreet Singh, Nirpreet Kaur and others, created commotion in the court. A protester, Karnail Singh, flung a shoe in the court soon after the judge acquitted Sajjan Kumar. He was arrested immediately.

Jagdish Kaur said, “I believe I will not get justice now. The court should have convicted Sajjan. Now that he has been acquitted, so we should be punished.” Sajjan Kumar still faces trial in another 1984 genocide case. In a third case, the Delhi Police had filed a closure report, saying there was no evidence against him.

The court has fixed May 6 for hearing arguments on the quantum of sentence in the case.

Five members of a Sikh family, namely Kehar Singh, Gurpreet Singh, Raghuvender Singh, Narender Pal Singh and Kuldeep Singh, were killed by a mob in the Raj Nagar area of Delhi cantonment in the riots that broke out after the assassination of late Prime Minister Indira Gandhi on October 31, 1984. The killings were reported on November 1 and 2, 1984.