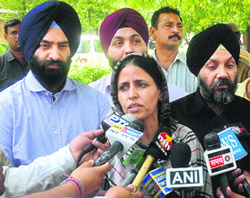 SAD launches campaign to save Bhullar from gallows

Chandigarh, Punjab: The SAD may have turned secular under its president Sukhbir Singh Badal, but the Sikh or Panthic agenda remains at the core of its being. And it is because of this that the party has launched an initiative to save Devinder Pal Singh Bhullar from the gallows.

The SAD has time and again resurrected the Panthic agenda. Even now while pleading for clemency for Bhullar, it wants to come across as a party that cares for the Sikh community. In fact, sources say there is no option before the SAD. The party has kept the 1984 Sikh Genocide issue alive 25 years after the tragedy and still uses it to attract votes during successive elections. As such the demand for commuting the death sentences of Bhullar and also that of Beant Singh assassin Balwant Singh Rajoana into life imprisonment have become Sikh issues.

The Sikhs in Punjab feel that the ‘special circumstances’ in which the crimes took place should be taken into account and that both the activists be saved from the gallows. The case for saving Bhullar has become stronger in Punjab in the wake of the stand taken by the presiding judge of the apex court as well as reports of Bhullar’s poor mental condition.

In such a situation there is no option before the SAD but to mount a campaign in favour of Bhullar.

This takes care of Panthic sentiments and is likely to help the party garner Panthic votes in the forthcoming elections.

Sources said the SAD is keen to guard its Panthic turf and more so in recent years. It saw its popularity in the Sikh heartland of Malwa suffer after former Punjab Congress chief Capt Amarinder Singh competed with the Akalis on being more ‘Panthic’ than them.

The SAD believes that the secular nature of the People’s Party of Punjab (PPP) ensured that the Panthic vote did not drift away from the party in the last assembly elections.

With Punjab Pradesh Congress Committee chief Partap Singh Bajwa not keen on a Panthic agenda, the SAD feels it can hold on to the Sikh votes by taking up Sikh issues.

The SAD has moved carefully to win over several Sikh organisations to its fold in the past five years to consolidate its Panthic vote. It has won the support of the radical Damdami Taksal disputed head Dhumma, leader Jasbir Singh Rode and prominent human rights lawyers in Chandigarh. Those opposed to it, including Simranjit Singh Mann and Daljit Singh Bittu, have been marginalised.

However, the SAD is walking a thin line. While it wants to make political capital of Sikh issues, it has to ensure that law and order in the state is not disturbed.

As a source put it: “Anyone can take the lead, garner sympathy for a cause and also get votes. If despite this Bhullar and Rajoana are hanged, the onus can be put on somebody else, leading to a potentially violent situation in the state.”

The SAD, however, feels it can take up the Sikh issue and maintain law and order too, something it has not been able to do earlier.

The memorandum says that when Bhullar was brought from Germany, the German Appeals Court had noted that he should have not been deported from Germany. “Bhullar’s conviction is based on a confession made in police custody. While Bhullar is convicted for abetment and conspiracy, the main accused has been acquitted by the court,” the memorandum reads.

It says Bhullar is not in a fit state of mind and is in a mental hospital. “As per our information, your government has always taken a stand against the awarding of death penalty to Bhullar. We are informed that your government had been assured by the Government of India that Bhullar would not be given the death penalty… We request you to take up this matter with the Government of India and the President to accept the petitions not to award Bhullar the death sentence,” the memo says.