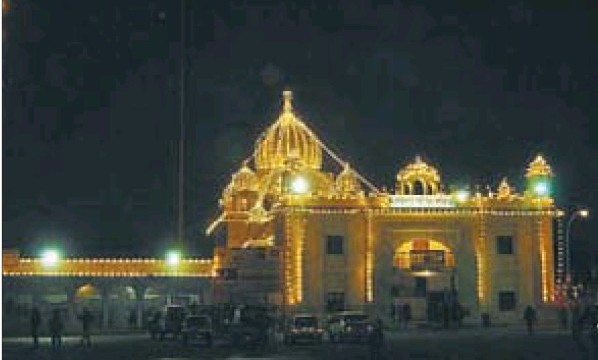 SAD, Cong gear up for ‘show of strength’

Comments Off on SAD, Cong gear up for ‘show of strength’ 646 Views

Fatehgarh Sahib, Punjab: Shaheedi jor mela  Release Sikh detainees to dominate the proceedings of splinters Akali factions; PPP to hold conference. Former finance minister Manpreet Singh Badalled People Party of Punjab (PPP) will organise its political conference during the shaheedi jor mela for the first time. With political conferences at the mela scheduled for December 26, the SAD and Congress leaders are leaving no stone unturned to make their conference a show of strength.

As parliamentary poll will be held next year, various political parties have been making all-out efforts to woo the voters.

Manpreet Badal had announced in the past that he would not hold any political conference at the mela , maintaining that it was a religious occasion.

But his party is now organizing its political conference near Gurdwara Jyoti Swarup.

The Congress leaders have announced that their conference would be attended by the party leaders in large numbers.

The Sikh high priests had appealed to politicians in the past to avoid politicising religious function but the plea seems to have fallen on deaf ears.

SAD general secretary Prof. Prem Singh Chandumajra has confirmed that the entire state cadre of the SAD and senior BJP leaders would be there and elaborate preparations have been made at the state level.

“We are focused to address the religious gathering and ensure that the masses are addressed by the senior leadership,” he said.

The issues concerning the Sikhs, including the Operation Bluestar and justice to the victims of the 1984 genocide are likely to be highlighted at ruling SAD political conference.

The principle opposition party of the state, the Congress too wants to make the most of the occasion, said sources. It would bring all its leadersCapt Amarinder Singh, Rajinder Kaur Bhathal, Sunil Kumar Jakhar, Shamsher Singh Dullo, Jagmeet Singh Brar- on a common platform.

According to Congress leaders, associated with the arrangements for the event, party activists from Fatehgarh Sahib and surrounding districts have been assigned the task of mobilising workers. Partap Singh Bajwa, PPCC president, said: “We have sent invites to all our leaders. We expect a huge gathering.”

Bajwa assigned duties to the Congress leaders for the success of the conference. Party MLAs and other leaders in constituencies of Fatehgarh Sahib, Amloh, Khanna, Samrala, Payal, Mohali, Kharar, Rajpura, Dera Bassi and Nabha were asked to mobilize party workers.

Bajwa said Congress would highlight the achievements of UPA Government at center.