Washington, USA: A US commission has asked Defence Secretary Chuck Hagel to explain exclusion of Sikhs, known for their valour and pride, from the American armed forces. In a letter, the US Commission on Civil Rights requested Hagel to respond to a Department of Defence policy that “appears to presumptively exclude” Sikh Americans from serving in the US armed forces if they do not give up certain articles of their faith or unless an individual accommodation is granted.

In its letter dated December 3, which was released to the media yesterday, the Commission said the current US military regulations generally prohibit wearing of religious headgear and maintaining other religious requirements such as unshorn hair and beards.

“It is our understanding that the military’s concern is the possible interference of the Sikh turban and facial hair with protective gear such as gas masks or other military headgear,” the Commission stated.

“Because we received testimony that Sikh service members can wear their helmets and gas masks properly while maintaining their unshorn hair and beards and wearing their turbans without compromising safety or decorum, the commission is concerned that the aforementioned policies may result in the unnecessary exclusion of Sikh Americans and Americans of other religious faiths from military service based on their religious beliefs manifested in their dress and grooming,” the letter said.

The Commission points to the “burdensome procedures” imposed on military members who wish to obtain an exemption from such regulations. These include submitting a petition signed by thousands of people and securing the support of dozens of members of the Congress.

“The privilege of serving one’s country should not be denied to a person for adhering to his or her religious beliefs,” said the commission’s chairman, Martin R Castro.

“We look forward to a constructive dialogue with the Secretary of Defence to ensure that Sikh Americans and others may serve without sacrificing their faith,” he added. The move comes months after Major Kamaldeep Singh Kalsi, who has received a personal accommodation or exception from the Army’s policy, in a briefing helped the commission understand the impact of the military’s policy on Sikh Americans.

To date, only two other Sikh Americans have joined Major Kalsi in serving in armed forces – Captain Tajdeep Rataan, who also served in Afghanistan and was awarded both the US Army Commendation Medal and the NATO Medal for his service, and Simranpreet Singh Lamba, an Army enlisted service member. 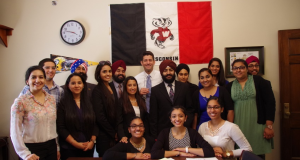