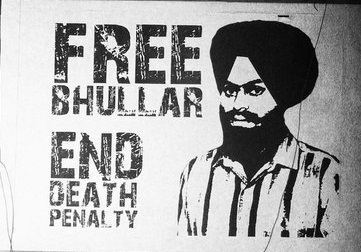 Delhi, India: Human rights activists have expressed shock and disappointment over the Supreme Court’s verdict, rejecting the petition of Devender Pal Singh Bhullar who sought commutation of his death sentence on the grounds of inordinate delay in rejection of his mercy petition by the President.

Stating that Bhullar was at risk of imminent execution, Amnesty International India appealed to the people to write to the President, the Prime Minister and the Union Home Minister urging them not to execute him. Calling for a retrial of the case in proceedings that complied with international standards, Amnesty advocated commutation of all death penalties to life imprisonment and a moratorium on executions with a view to abolishing death penalty.

The People’s Movement Against Death Penalty, headed by Justice V.R. Krishna Iyer, said the dismissal of Bhullar’s petition would affect at least 17 more prisoners whose mercy petitions were rejected by the President. In a statement, its State representative Selvaraj Murugaiyyan said a human being languishing in prison for 20 years, waiting to be killed one day, should have been shown some mercy. The execution of Bhullar would render no justice to the victims after so many years.

Like Punjab pleading mercy for Bhullar, the Tamil Nadu Assembly and all political parties in the State had unanimously sought mercy for three convicts facing death penalty in the Rajiv Gandhi assassination case. The hasty executions of Afzal Guru and Kasab, without even notifying the family or allowing them to take a legal aide, were considered a big blow to human rights from the executive body of the nation, Mr. Murugaiyyan said.

A. Kathir, executive director of Evidence, a human rights organisation, said the execution of Bhullar would amount to the court endorsing double punishment on a convict in the same case. “Bhullar was under incarceration for 20 long years. There was inordinate delay in the disposal of his clemency petition. How can he be hanged after two decades of imprisonment,” he asked.