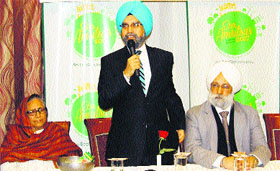 Amritsar, Punjab: Eco-Amritsar, an initiative by EcoSikh USA, which took off in June 2012, held a stakeholders project review meeting here today at Clarks Inn. EcoSikh president Dr Rajwant Singh discussed various issues which would be taken up in the coming year, with other organistaions and institutions of Amritsar who have been contributing to nurture this environmental project of the city.

Eco-Amritsar was initiated as a citizens’ project when it was launched last year. Since then it has observed Amritsar Foudnation Day on 6th July, celebrated Guru Ramdas’ birth anniversary in a very innovative ecological way and launched Green Nagar Kirtans.

Eco-Amritsar chariman Gunbir Singh opened the session addressing all the stakeholders and welcomed them for open discussion and constructive criticism. Principals from schools and colleges of Amritsar shared their commitment to the project via Eco-Amritsar’s upcoming ‘Green Schools’ initiative.

Baba Kulwant Singh of Ajnala, who initiated daily cleaning of the galliara with volunteers from over 60 villages around Amritsar was highly acknowledged during this meeting. Inspiring videos from the cleaning of galliara and Green Nagar Kirtans were shared.

In the concluding session, Eco-Amritsar announced five major initiatives for the coming year-Green Schools, Amritsar as a plastic/litter-free city, farmers’ awareness programme towards organic agriculture and against stubble burning.

Chariman Eco-Amritsar, Gunbir Singh said, “The programme has taken out six major Green Nagar Kirtans reaching across all communities in the city for a cleaner, greener more responsible and sustainable city for the future generations.”

Host of NGOs and institutions participated in the meet, appreciated the accomplishments of the programme, and assured their continued support for the city.

The president EcoSikh said, “I am delighted to see the way Eco-Amritsar programme is shaping up. It has already become an inspiration for various cities within the country and overseas.” He said it was the very first time that a positive movement towards sustaining a city had been created by the citizens themselves, and there was no other such example in the entire world.

Previous: NRIs pitch in for tighter security at Golden Temple
Next: Include Jat Sikhs in OBC list: Akalis to Centre 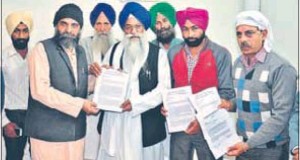