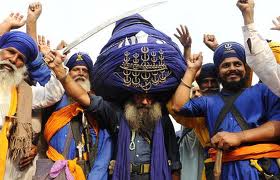 New Delhi: A member of the Nihang, a traditional armed Sikh order, poses for a photo in his 300 metre turban during a festival in Amritsar, India.

The warrior was yesterday pictured celebrating the Maghi Mela festival at the city’s Golden Temple.

The Nihang is an armed Sikh order, although it is largely ceremonial now.

They wear steel throwing weapons, called chakram, in their tall blue turbans, together with daggers, knives and swords of varying sizes and an iron chain.

This style of round turban is known as a dumaala and there is a tradition of competing to see who can wear the largest. According to Guinness World Records, in 2010 a Nihang called Major Singh wore a 400 metre turban that weighed a neck-straining 35 kilograms.

Early Sikh military history is dominated by the Nihangs, who are known for winning battles despite overwhelming odds.

Nihang is a Persian word meaning crocodile, and was given to the warriors by the Mughals, who said they fought as ferociously as the savage reptiles.

They gather at festivals to display their skills in a fighting style known as gatka, a weapon-based martial art associated with the Punjab region.

Meanwhile, a magnificent ‘fortress turban’ is to go on display at Birmingham Museum and Art Gallery.

The turban is known as a dastaar boonga or turban fortress worn by a group of skilled warrior Sikhs called Akali Nihangs.

It gives visitors a rare chance to explore the story of the Sikh turban; a distinctive symbol of Sikh faith and history.

The exhibition, which runs from 26 January – 28 April 2013, is on tour from the British Museum and will also include contributions from Birmingham’s Sikh community explaining why the turban remains important to them today.

2013-01-18
Guest Writer
Previous: US Federal Judge Disqualifies Himself From Badal’s Case
Next: On sets, an animation film on Sikh Guru’s sons