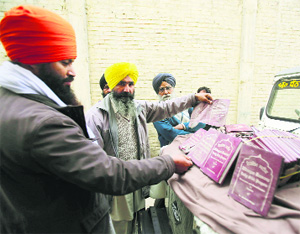 Amritsar, Punjab: Members of the Sri Guru Granth Sahib Satkar Committee today recovered a set of religious books that were dumped in a godown of a local transport company.

Committee member Nishan Singh said they had received information that the books were kept in a “sacrilegious manner” in the godown, following which they raided the premises.

He said the transport staff initially denied having them, but subsequently admitted to it. “We found nearly 50 religious books lying amid unclean surroundings and immediately took them in our possession.”

He said they had also reported the matter to the police and would initiate legal action if the transport owner did not admit to the lapse and apologise for it. He said it seemed the books were lying in the godown for long as they were published way back in 2005.