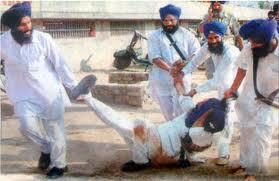 Amritsar, Punjab: The Congress today urged Akal Takht Jathedar Giani Gurbachan Singh and other members of the Sikh clergy to “rein in SAD leaders who are indulging in illegal drug trade”.

PPCC spokesperson Sukhpal Singh Khaira alleged: “It has become clear that the ruling alliance lacked the will to control the drug menace. In fact, it is shielding Akali leaders involved in the racket”. He said druglord Jagdish Bhola’s disclosures led to the arrest of Maninder Singh alias Bittu Aulakh, YAD general secretary, and his accomplice Jagjit Chahal.

“It is evident that the trio (Bhola, Aulakh and Chahal) have close relations with senior Akali leaders of Majha region, including Bikram Majithia, Rattan Singh Ajnala and Veer Singh Lopoke. These leaders are trying to shift the blame on each other,” he said.

Vikas Soni, president, Youth Congress, Amritsar, said: “The Youth Akali Dal has turned into a den of criminals and drug peddlers, besides cable, mining and land mafia. Many of its leaders have been accused of heinous crimes, but no action has been taking sowing to the political influence”.

He said the Youth Congress would launch a crusade against criminalisation of the political system.