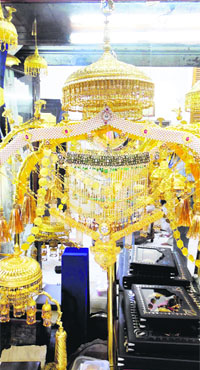 Amritsar, Punjab: Devotees visiting the Golden Temple tomorrow to catch a glimpse of rare artefacts during ‘jalau’ (show of splendour) on the occasion of installation ceremony of Guru Granth Sahib will find them in renewed glitter as they will be exhibited for the first time after the ‘kar sewa’ involving their repair and polish work was completed recently.

There are over five dozen rare and precious artefacts, which are put on display at the Golden Temple, Akal Takht and Gurdwara Sri Atal Rai on different gurpurbs. Among these are diamond necklaces, pearls of Kunwar Naunihal Singh, jewel-encrusted ‘kirpan’, a ring of Princess Bambah, a gold canopy, gold and turquoise peacock, gold necklace made of currency notes of Guru Nanak Dev, golden spades and much more.

These are displayed during ‘jalau’ (show of splendour) from 8 am to 12 noon on the birth anniversary of Guru Nanak Dev, Guru Ram Das, Guru Hargobind, Guru Teg Bahadur and Guru Gobind Singh, besides the installation ceremony of Guru Granth Sahib.

The family of Sawinder Pal Singh and Inderpal Singh had expressed its wish to perform the ‘kar sewa’ before the SGPC and they were entrusted the job in May this year. It took them three months to repair and polish these artefacts. The SGPC had also constituted a three-member committee to supervise the ‘kar sewa’.

Talking to The Tribune, committee member Sukhdev Singh Bhurakohna said the family had roped in experts from Mumbai, Delhi, Banaras, Jaipur and Surat for repair and polish work of these artefacts, which had regained their glitter now.

Following the completion of the ‘kar sewa’, Bhai Sukhdev Singh performed ‘ardaas’ in the presence of Takht Sri Kesgarh Sahib Jathedar Giani Mal Singh and Golden Temple’s Head Granthi Giani Jagtar Singh. Later, SGPC president Avtar Singh Makkar visited the ‘toshakhana’ and inspected the rare artefacts. He was shown the photographs of these artefacts clicked before and after the ‘kar sewa’.

The SGPC has also prepared an album of these rare artefacts, which will be released at a later date. It has also been decided to make ‘toshakhana’ more secure by putting up bulletproof and fireproof glasses. SGPC secretary Roop Singh was also present on the occasion.

Incidentally, the SGPC recently set up a committee to deliberate on the issue of permanent display of these artefacts for the devotees at the ‘parikarma’ of the Golden Temple. Earlier, former Rajya Sabha MP Tarlochan Singh had advocated the move, contending that permanent display will make the devotees aware of the invaluable articles gifted to the holy shrine. He had also stressed on the preservation of these artefacts in a modern way.