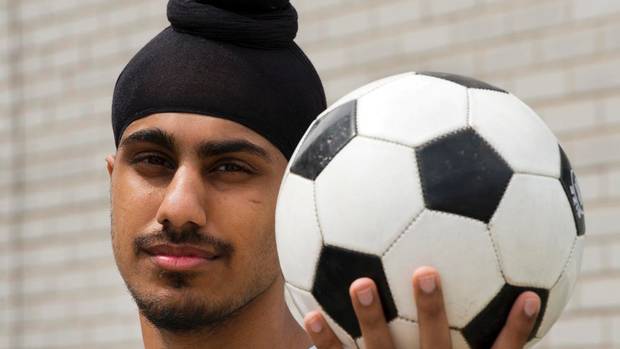 Aneel Samra, 18, holds a soccer ball in his backyard Wednesday, June 5, 2013 in Montreal. Samra has not been able to play organized soccer since last year due to his religious headgear. (Ryan Remiorz/THE CANADIAN PRESS)

Ontario, Canada: The Canadian Soccer Association has red carded a provincial association over its refusal to let turban-wearing children play, announcing the Quebec organization will be suspended until the ban is overturned.

The national organization took a more aggressive stance Monday in the ongoing controversy surrounding the Quebec Soccer Federation’s decision to restrict turban-wearing Sikhs from the pitch, saying its earlier efforts had failed to resolve the matter.

“The Quebec Soccer Federation’s inaction has forced us to take measures in order to ensure soccer remains accessible to the largest number of Canadians,” it said in a statement Monday night.

The national organization said last week it expected the Quebec association to reverse the ban, which has drawn international news coverage and condemnation from several federal politicians.

The extent of the impact of the suspension on Quebec players is not yet clear. However, according to Canadian Soccer News, the impact could be felt in a variety of ways unless the situation is resolved soon.

Its website said it could result in Quebec all-star teams being banned from play outside the province, and even the cancellation of games within Quebec that involve a nationally certified referee.

“Unfortunately, that means soccer players are being punished for something that the Quebec Soccer Federation should have corrected right away,” said Dr. Sanjeet Singh Saluja, a physician and former coach who publicly denounced the ban as having no medical justification.

“I’m sad to see it happen and I’m sad to see that it went this far but unfortunately the Quebec Soccer Federation, they chose not to follow the rules.”

The Quebec federation couldn’t immediately be reached for comment.

It has said it is concerned about safety and points out that the rules of the world governing body, FIFA, don’t specifically allow turbans.

Critics of the Quebec decision point out that FIFA’s rules don’t explicitly ban turbans, either.

Some of those who opposed the ban said they welcomed the national body’s tough-love approach.

Liberal Leader Justin Trudeau echoed the sentiment, tweeting that “Barring kids from playing soccer because they wear a turban is wrong. The CSA is right to suspend the #QSF.”

The CSA reports directly to the FIFA world body and is responsible for granting or revoking the membership of provincial federations.