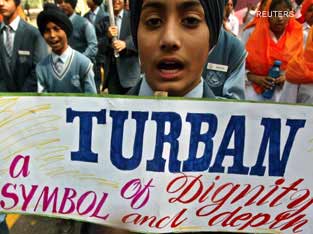 However, the school’s principal said there has been some miscommunication as there were already students studying there wearing turban.

Jalandhar, Punjab: A family belonging to Amritdhari Sikh sect has alleged that a private school denied admission to their daughter as her turban was in breach of the school’s uniform, a claim rubbished by the institution’s principal.
Harpreet Singh alleged that his daughter Amandeep was denied admission by Cambridge International School for Girls because her turban did not conform to the school’s dress code.
However, the school’s principal Deepa Dogra denied the allegation and said there has been some miscommunication as there were already students studying there wearing turban.

Singh, who wanted his daughter to get admission in class IX, said they were told by one of the faculty members that wearing turban was not allowed in the school. He also complained the matter to Shiromani Gurudwara Prabhandhak Committee (SGPC), the apex religious body of the Sikhs, following which some local Sikh leaders gathered outside the school today in protest.
Describing the incident as unfortunate, Dogra apologized to the family for “any hurt caused due to miscommunication”.