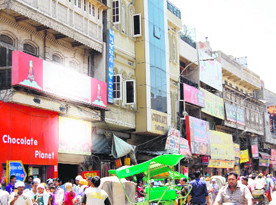 Patiala, Punjab: The functioning of the Punjab Pollution Control Board (PPCB) is under the scanner for its failure to take strict action against a hundred unauthorised upcoming hotels in the ‘galliara’ in the vicinity of the Golden Temple.

The PPCB could have sealed these hotels for these violations for not taking its consent under the Air and Water Pollution Act. But instead, it has just issued notices while air and underground water pollution continues unabated.

The hapless PPCB now has shifted the entire blame on the local Municipal Corporation claiming that “it can only issue notices which it has already done”. They say it is the duty of the local MC to seal buildings that are coming up.

Sources said the PPCB had failed to take serious action against the hotels, given the proximity of their owners to ruling politicians. There is resentment against the hotels as these are continuously polluting the pristine environs of the Golden Temple.

A former SGPC member said that due to the increasing pollution level, ‘sewa’ had to be performed regularly to clean the blackish-greenish deposit on the gold plating of the shrine.

“Till a few years ago, there was no need to perform ‘sewa’ so regularly, but now if it doesn’t rain for sometime, blackish stains on the gold plating appear,” he stated.

A PIL in this regard is pending in the Punjab and Haryana High Court.

PPCB chairman Ravinder Singh said the PPCB had done its best by issuing notices and ensuring that all hotels had installed sewage treatment plants. “We cannot do any more. Notices have been sent for which a majority of the hotels have given their replies,” he stated.