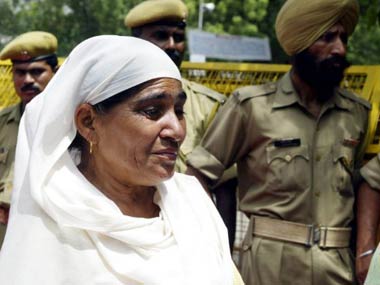 New Delhi:Whenever the Delhi Sikh Gurdwara Management Committee (DSGMC) elections draw near, the focus of rival parties turns back on the 1984 Sikh genocide and the displaced community members.

While releasing the SAD (B) manifesto today, party chief Sukhbir Badal hit out at the the Sarna brothers — Paramjit Singh and Harvinder Singh — for allegedly ignoring the genocide victims.

Over 10,000 Sikhs were killed in the government sponsored genocide that followed the assassination of the then Prime Minister Indira Gandhi on October 31, 1984.

There have been two commissions of inquiry and eight committees to probe the genocide. In more than 28 years, the government’s efforts to bring the guilty to book have just meandered through paper work and setting up of inquiry commissions.

For his part, DSGMC president Paramjit Sarna, had, in June last year, announced the setting up of a memorial for the victims. He claimed that the DSGMC had spent huge sums of money in getting the best lawyers to represent the Sikhs in the GT Nanavati Commission of inquiry while “Badals only used the victims”.

Sukbir said: “Sarnas, being close to Congress leaders, have always conspired and acted against the 1984 Sikh victims, witnesses and their lawyers on the directions of the Congress party since most of the accused are senior leaders of the party, including Sajjan Kumar and Jagdish Tytler.”

“We can never forget the dark episode,” a statement from the DSGMC had said last week. While compensation was distributed in Delhi, the Punjab Government, led by Parkash Singh Badal, had failed to distribute the relief amount, Sarna had claimed.

Jarnail Singh, author of “I Accuse… the Anti-Sikh Violence of 1984”, said: “Instead of making allegations against each other, the Badals and the Sarnas should unite and get justice for the genocide victims.”

Ironically, in June 2004, the DSGMC had honoured Tytler with a siropa, which led to global protests from the community. A year later, the GT Nanavati Commission indicted Tytler, who had to resign as the Minister of State for Overseas Indian Affairs. The government had then asked the CBI to reinvestigate the cases.

Tyler along with Sajjan Kumar, HKL Bhagat, Lalit Maken and Arjun Das were blamed for the genocide by the Sikh community. Maken and Das were shot dead by activists while Bhagat had died a natural death. The last time the 1984 genocide dominated the political firmament was before the 2009 Lok Sabha polls. When Tytler and Sajjan were given the Congress ticket, Jarnail Singh, a journalist, had hurled a shoe at the Union Home Minister P Chidambaram.