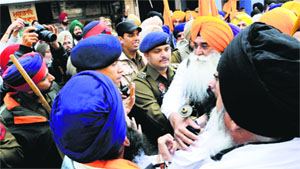 Comments Off on Police, Sikh sangat come face to face in Amritsar 563 Views

Amritsar, Punjab: There was a face-off between the police and Sikh groups at the Golden Temple complex as the police tried to stop a ‘Rihaee March’ in support of Bhai Gurbaksh Singh Khalsa who is on a fast at Gurdwara Amb Sahib, Mohali to seek the release of Sikhs languishing in various jails since the days of militancy.

Activists of the Panthak Sewa Lehar, Dal Khalsa, SAD (Panch Pardhani), SAD (Amritsar) and AISSF converged on Akal Takht at 9.30 am. Akal Takht chief Giani Gurbachan Singh performed ‘ardas’ and claimed that the state government was with them over the issue.

Trouble began when the activists broke into groups apparently after learning of police presence there. The police first stopped the group led by Panthak Sewa Lehar chief Baba Baljit Singh Daduwal near the main entrance of the Golden Temple. Subsequently, Daduwal and his aides were detained. (Dal Khalsa leader Kanwar Pal Singh was arrested from his Amritsar residence a night before).

The police then headed towards another exit of the shrine to prevent leaders like Harpal Singh Cheema and Karnail Singh Peermohammed from holding the ‘Rihaee March’. The two sides virtually come to blows with the turban of a ‘Panj Piara’ flaying fell off.

The police then allowed selected sangat to proceed. Those stopped from joining the march staged a dharna on the road leading to the Golden Temple for an hour. The matter was resolved on the intervention of the Akal Takht chief and Sikh activists allowed to hold the march escorted by a police team led by Additional DCP Parampal Singh. In the meantime, another group of Dal Khalsa activists left for Mohali but were intercepted by the Beas police, following which they too staged a dharna in Beas.

The detained leaders, Daduwal and Kanwar Pal, were let off in the afternoon. Talking to mediapersons here this evening, the Jathedar Gurbachan Singh said the confrontation was a result of a misunderstanding. He said Sikh groups had not intimated the state government about their plan to take hold the march and the government was apprehensive that it may disturb peace. The issue was resolved after those leading the march assured the authorities that they would maintain peace, he said. He said he had met Bhai Gurbaksh Singh Khalsa and forwarded his demands to Chief Minister Parkash Singh Badal.

He said the Akal Takht too had been demanding the release of ‘innocent’ Sikhs. Meanwhile, the Dal Khalsa has flayed the government for it attempts to “foil” the march.