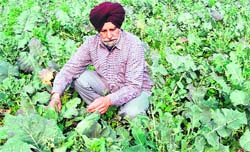 Comments Off on Pingalwara makes strides in natural farming, gets record yield 425 Views

Amritsar, Punjab: The All-India Pingalwara Charitable Society, which is primarily known for its yeoman’s service to the poor and needy, is making rapid strides in the field of natural farming. It has become a guiding light for the state farmers who have been resorting to indiscriminate use of pesticides.

Spread over 32 acres, the society’s farm at Dhirakot village, near here, has witnessed some encouraging results in farming. The farm is being managed by society member Rajbir Singh.

The farm has produced a record yield of sugarcane. In the very first year, its production was an impressive 400 quintals per acre. The farm boasts of a research centre where farmers from other states come to learn farming practices sans chemical fertilisers and less water.

Talking to The Tribune, Rajbir said they had recently adopted a technique to grow poplar trees along with crops, which not only improved the environment but also boosted the farm production.

Under the technique, they planted 80 trees per acre with a gap of 28 ft between each of them in the east-west direction and 20 ft gap in the north-south direction. Along with it, they grew sugarcane over 1.25 kanals while utilising the remaining 192-ft land for other crops.

He said no special effort, feed or water was needed for growing poplar trees. On growing up, these trees also lend support to sugarcane which attains the height of 13 ft to 14 ft. “These trees also produce a cooling effect. Besides, the birds that make these trees their home kill pests and worms that are harmful to the crop. Their leaves act as biomass which adds to the fertility of the soil”. He said poplar trees attained maturity in four to five years, following which the farmers could repeat the process. The farmers could get more than double the yield using this technique, he claimed.

Rajbir revealed they had resorted to multi-cropping in their farm under which they had cultivated various crops. “We cultivate basmati, corn and black-eyed beans simultaneously in our farm. We sow basmati over 12-ft area followed by 3.5-ft space for corn and beans which are sown over 9-inch bed that acts as a breeding ground for vermicompost”.

He said they were using natural material like cattle urine/dung, pulses, jaggery, garlic and green chilli in different combinations to prepare fertilisers which they mix with water. He said only 15 per cent insects were harmful to the crops. “When the farmers use chemical fertilisers, they end up killing even those insects that are beneficial to the crop. However, this does not happen in case of natural fertilisers.” He said an indiscriminate use of pesticides on crops had dangerous repercussions on human life.