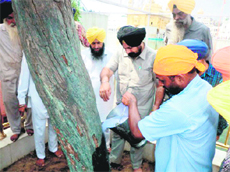 PAU experts step up efforts to save Dukhbhanjani Beri

Amritsar, Punjab: A team of experts from Punjab Agriculture University (PAU) today inspected the ancient “ber” trees at the Golden Temple Complex and initiated measures to ensure long life of Dukhbhanjani Beri whose roots were found to be wilting.

The team comprised Dr Pushpinder Singh Aulakh, Dr Harminder Singh, Dr DR Sharma, Dr Sarabjeet Kaur, and Dr Davinder Singh. After taking stock of the “ber” trees, Dr Aulakh said they had closely monitored the growth of the trees and found that the roots of Dukhbhanjani Beri were wilting while termite and lac insects had extensively damaged it. However, the other “ber” trees, Ber Baba Budha Sahib and Lachi Ber, were found alright. He still felt that the spray was necessary for all three ‘ber’ trees once in every 15 days.

The trees were pruned in the presence of the experts before using nitrogen urea and insecticides on them. The experts said this would revive greenery on Dukhbhanjani Beri which had wilted to an extent of 80 per cent. They said they would keep a close watch on its growth from time to time and make all the efforts to save it. Both the trees are over 400-year-old.

Previous: US needs to do more, says SGPC
Next: Sikhs caught in crossfire of France’s battle to stay secular