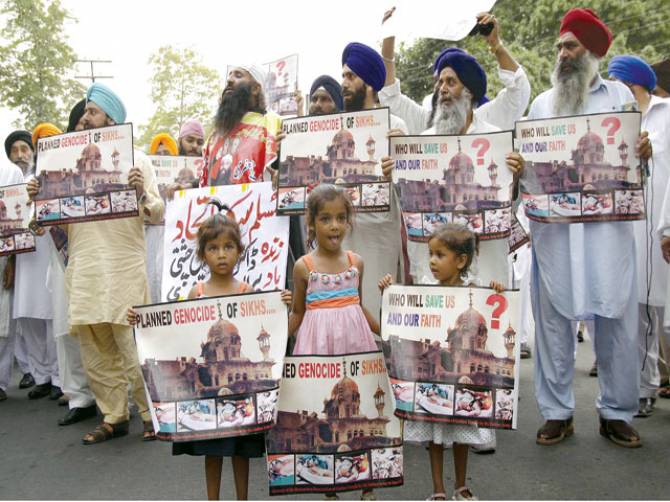 Lahore, Pakistan: Sikhs  held a protest outside the Lahore Press Club in a remembrance of the attack on the Golden Temple in India, and its desecration by the Indian Army.

The protest was led by leaders of Sikh Sangat Pakistan. On this occasion, the participants said they had and would never forget 1984 when their holy place was attacked by the Indian Army. The protest rally remembered the persecution of Sikhs leading up to, including, and following the Battle for Amritsar in June 1984. Operation Blue Star was a code name given by the Indian government to an attack when launched on the Golden Temple. The attack, initiated on May 31 1984, was one among many inflammatory actions taken by the Indian government.

This attack proved the values which is highest held in society: freedom, and even explicitly mentioned in all constitutions, including the Indian constitution as Freedom of religion, was not of importance in India. On May 31 1984, the Indian government launched an attack on the Golden Temple with 100,000 troops. There were only 251 Sikhs inside to protect the complex of the Golden Temple. But it was not a big attack at first because Sikhs were coming to Golden Temple to celebrate Martyr day of Guru Arjan Dev Ji.

Army tanks were used to break down the steps leading to the Parkarma from the hostel side and an 8-wheeled Polish-built armoured personnel carrier made its way towards the Akal Takht. Six or more Vijayanta tanks enter the temple complex crushing the delicate marble inlays of the Parkarma and plough their way towards the Akal Takht. Orders arrive and the tanks start firing their large 105mm cannons equipped with high explosive squash-head shells into the Akal Takht, trampling, destroying the structure and killing a large number of Sikhs.

The Sikh community, holding placards and banners inscribed with slogans against Indian government for this brutal act, were pledging not to forget the incident.

Previous: Sikhs proud of UK life, but most have faced racism
Next: College students abused for wearing turbans on city streets