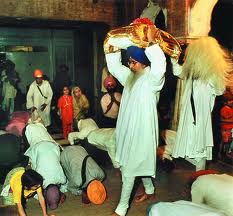 Pak Sikhs up against desecration of Guru Granth Sahib

Amritsar, Punjab: Anxious over rising incidents of desecration of Guru Granth Sahib in various cities of Sindh province in the past five months, Sikhs of Pakistan have decided to identify miscreants responsible for such acts and persuade them to mend their ways, failing which, legal action will be initiated against violators.

Former president of Pakistan Sikh Gurdwara Parbandhak Committee (PSPGC) Bishan Singh, who is also chairman of Baba Guru Nanak Welfare Society, Pakistan, told TOI over phone from Lahore on Saturday that there were certain elements, who wanted to create rift between Sikhs and Hindus. He said that in the past few months, there had been five incidents of desecration of Sikhs holy book in Shikarpur, Pannu Aquil and Mehar towns in Sindh in the “darbars” (worship places where holy books of Hindus and Guru Granth Sahib are placed together).

Three incidents of tearing pages of Guru Granth Sahib occurred in Khatwali darbar, Samadh Ashram and Sajal Sher darbar, all in Shikarpur and one each in Guru Nanak “darbar”, Mehar and Dall “darbar” in Pannu Aquil, said Bishan. A few days ago, an incident of burning of two holy books was reported in a darbar in Khairpur town of Sindh.

Bishan said that he had a meeting with Sikh sangat (community) of Peshawar in Gurdwara Bhai Joga Singh on Thursday where they decided to hold talks with the managements of those “darbars” to convince them to not hurt the Sikhs’ religious sentiments by showing disrespect to Guru Granth Sahib. “If they didn’t listen to us, then we will be left with no option but to take legal action against them,” he warned.

Meanwhile, Bishan said that the selection of members for PSGPC had begun by the Evacuee Trust Property Board and minister of interfaith harmony. The present term of the president of PSGPC had expired in December 2012 but was given six-month extension. He said that both departments have sought names of aspirants from provinces of Punjab, Sindh, Baluchistan and Khyber Pakthunkhwa. “I am hopeful that the members would be selected and president’s elections would be held before parkash utsav (birth anniversary) of Guru Nanak Dev in November.”