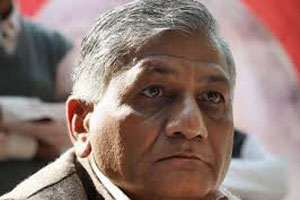 Amritsar, Punjab: Former Army Chief Gen V K Singh today said Operation Blue Star, carried out in 1984 to flush out militants from the Golden Temple, was a “hasty political decision” and claimed the army was unwilling to carry it out.

Singh, who was a major at the time of the operation, toldreporters here that the decision to send the Army in the Golden Temple was a hasty one, since the Army never liked to lift gun against its own people. Without naming the then Chief of the Army (Gen A S Vaidya) he said, “The then Army chief had vehemently said ‘no’ to initiate Army action against people belonging to the nation, but he had to carry out the order of his political bosses.” Singh had come here for a meeting prior to beginning his march under the banner of ‘Janlok Tantra Morcha’ on March 31 which would pass through Punjab and later enter in Haryana, Rajasthan and West UP.

Operation Blue Star was carried out at Golden Temple to flush out militants, led by Jarnail Singh Bhinderwalla who was also shot dead by the Army. Several militants, armymen and civilians were also killed in the exchange of fire. On the present law and order situation prevailing in Jammu and Kashmir he said, “To involve army in the J-K is not wrong since there is a proxy war and people from other country were adding fuel to make the law and order situation worse.”

He said that everybody knew that Army fought Kargil war very tactfully and won it but people also know who was responsible in the political system for having allowed such a situation to develop in Kargil Sector. About allegations of corruption in the Army, he claimed the forces were never involved in such decisions which were taken at the political level.

“The decision to buy ammunition and other infrastructure from foreign nations is done at the political level because such decisions are always finalised by the ministry of Defence or on the part the Government of the India,” he said.

Singh said that before finalisation of the equipment a “Quality Report” report is prepared by the ammunition experts from Defence. He said the March 31 march was being undertaken to

enlighten the people to bring changes in the present health,

education and political system of the country. He said that Anna Hazare would also join his march from Amritsar.