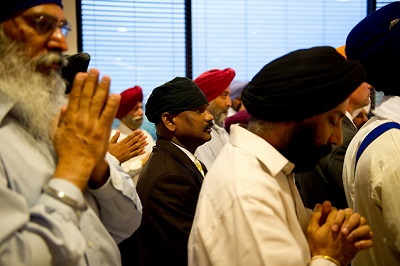 On Gratitude and Grievance: Rethinking Sikh Politics in the US

Comments Off on On Gratitude and Grievance: Rethinking Sikh Politics in the US 364 Views

On the evening of Saturday, September 21, 2013, Dr. Prabhjot Singh was attacked in Harlem, New York, by what is estimated to have been around 20 males riding bicycles. The event has been publically labeled a violent hate crime, as Singh described his attackers yelling words such as “terrorist” and “Osama.” Particularly notable is the emergent discourse that has come out of Singh’s attack, as the conversation harkens back to other more noticeable moments of racist violence against Sikhs. These include the murder of Balbir Singh Sodhi in the days following 9/11, as well as the attack of the Oak Creek gurdwara in August 2012, where six members of the congregation were murdered by white supremacist Wade Michael Page. Curiously, the mainstream Sikh response to Oak Creek and now Singh’s attack, has been marked heavily by calls for the Sikh practice of “Chardhi Kala,” which translates to a state of joy and eternal optimism. For example, it has been invoked by the Sikh Coalition in its “Chardhi Kala 6k,” a memorial walk and run to remember the victims of Oak Creek on the one-year anniversary in hopes of “turning tragedy into triumph.”

In the spirit of “Chardhi Kala” Singh penned an article for the New York Daily News merely three days after his attack. Titled “Harlem hate crime victim Prabhjot Singh: I’m feeling gratitude,” the article expresses Singh’s thankfulness for being assaulted away from his wife and son, and in a place where bystanders could save him. To the repeated questions of surviving a hate crime, Singh replies: “Honestly, I can’t come up with a better response than simply ‘gratitude.’” Emphasizing Singh’s professional and middle class status, the article goes on to make clear that Singh will continue to live and work to serve the communities in and surrounding Harlem. The message is one that suggests that it might have been worse, and that it will not change the way Singh and his family live and function.

The article has been widely circulated by Sikhs and various others, receiving a great deal of praise for Singh’s expression of what seems to be otherworldly sentiment, aligning itself with the practice of “Chardhi Kala.” Yet, this concept of gratitude in particular, forwards the argument that these moments of racist violence toward Sikhs are merely exceptional moments, which must be acknowledged but eventually shed in order to move forward. This notion of gratitude uncritically frames racist violence as an act of ignorance, perpetrated by uneducated individuals, with no attachment to the day-to-day violence enabled by political structures or legal institutions. Gratitude, moreover, furthers the logic that the violation of Sikh bodies occurs in isolation, and that to recognize them as acts of brutality is simply an intermediate step toward triumphantly transcending the realities of racism. “Chardhi Kala,” in this case—wedded to the definition of gratitude as an acknowledgement of a received gift—urges Sikhs who are under constant surveillance and threat, to be grateful.

Following this logic of gratitude, Singh goes on to assert, “Even more important to me than my attackers being caught is that they are taught.” Since 9/11, the narrative of misidentification and the need to educate about Sikhism and Sikh identity has propelled hasty anti-Muslim language. In response to this unintended form of Islamophobia, minority voices in the Sikh community have more recently made distinct efforts to demonstrate solidarity with Muslims in the U.S., articulating the necessary coalition-building efforts about the two similarly vulnerable populations. However, rather than coalition-building, the platform of education, dedicated solely to Sikhism, is increasingly stressed as the only antidote to violence against Sikhs.

In this frenzy to give meaning to Singh’s attack, the education platform appears to be another form of violence. Exploited by conservative and liberal elements Singh has become a mere example of misidentification, a representative figure for the sake of the U.S. Sikh mainstream voices that deny the singularity of Singh’s experience of violence. What appears then might be that Singh’s attack has been forced into the common sense reaction of institutional instruction as the primary U.S. Sikh political platform, even before he himself may have had time to reflect and process the terrifying event of September 21st. The uniqueness of Singh’s individual experience as a survivor of violence, has thus not only been erased by the brutality of a racist attack but doubly erased by the common sense discourse which frames his experience as merely part of the Sikh community’s struggle to both cohere to the model minority myth, and to achieve the “American dream.”

In response to both the platform of education and Singh’s reaction of gratitude, I’d like to offer an alternative call for grievance. Grievance is defined by the existence of an injury or wrong, real or imagined, and as such is the basis and cause for complaint or protest. Of course, it harkens and acknowledges grief, which relies and places value on the work of mourning. To grieve and to mourn is to bear the weight of loss, of death, and I will add, of violence. Grievance makes room for critique and dissent in the wake of injustice. To bring grievance is to bear witness and testify, and it is not limited to individual acts of violence. Grievance demands accountability from the political structures and legal institutions that enable racist violence against those who wear turbans and keep facial hair. And as such, grievance compels and desires sorrow, anger, and outrage. Sikhs need not render grief and grievance, mourning and melancholia, as antithetical to a broader religious ethos. Rather, it is through these affective maneuvers, out of grievance, that a multitude of political possibilities emerge.

Recognizing the patterns of violence against communities of color in the U.S., including Sikhs since the early 20th century, the Sikh community must see itself as part of a longer history of anti-racist struggle. If we rely on the platform of education, we serve to only estrange ourselves from not only previous histories of violence against Sikhs in the U.S., but we estrange ourselves from the racial logics that structure and govern life in the U.S. more broadly. Through this alternative call, I urge Sikhs in the U.S. to see these events and attacks, as forms of racist violence, and as such, seek new and transformative modes of racial justice—in conjunction with interfaith solidarities. The work of solidarity both demands and enables the ethical imperatives to grieve, act, and labor with others. If we are to achieve at least somewhat more fundamental forms of change, it has to be predicated on our work in coalition with other racialized communities—and that has to come from a place of grief and grievance. We live in a world where countless others have mobilized because of brutality and constant injury, because there exists little to no accountability in the wake of injustice; it is for these reasons that racial justice mobilization efforts are all the more urgent and politically imperative. To act and demand otherwise can only disavow and defer fundamental change and the possibilities of other, more just worlds.