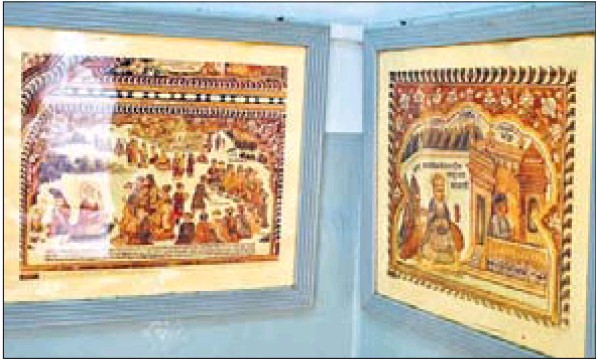 Amritsar, Punjab: The ostentation of more than 25 digitalised ‘fresco’ paintings depicting the life of Guru Nanak Dev and his principles are on display at the Central Sikh Museum (Ajaib Ghar), in the Golden Temple complex.

The museum is dedicated exclusively to Guru Nanak Dev, the first Sikh guru. The digitalised paintings have been termed as ‘Janam Sakhi’ by the museum authorities.

The fresco paintings have been photographed from the historical Atal Sahib Gurdwara, and can be seen on the first floor of the museum.

“The photographed paintings were displayed here in the early 1980s so that visitors could have a glimpse of Guru Nanak’s life. It also promotes the work of artists who made those paintings ages ago,” shares Sohan Singh, sewadar (guide) at the museum since 2002.

A large number of visitors daily visit the hall. “My family and I were mesmerised by the Sikh museum, especially by the wall paintings which say a lot about the founder of Sikhs, Guru Nanak Dev. The art is phenomenal and exceeded our expectations,” said Michael Stapf, a tourist from Dusseldorf, Germany.

Iqbal Singh, additional manager of Golden Temple, said, “These paintings captivate the visitors who also give their feedback to the sewadars,” said Singh.

“Though visitors come from different parts of the world, they make it a point to see these paintings that depict the messages of ‘Kirat Karo’ (work is worship), everyone is equal, say no to caste distinctions, imbibe the spirit of service etc.”

Besides paintings, an ancient travel map on the sojourn of Guru Nanak across the world is also a crowd puller. Nanak Guru travelled for 40-long years not only across India but also in foreign land mainly on foot.